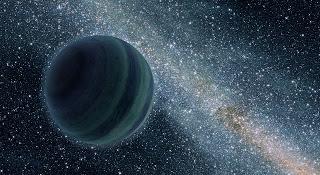 Astrobiology is the science discipline that seeks to understand the origin and emergence of life and what it might entail beyond our corner of the universe.  Does that mean that astrobiologists are looking for little green men or gray ones for that matter? No, it does not, but they sure would be happy if they could find even the tiniest microbe other than what exists here on Earth.  I recently learned quite a bit about astrobiology and what is all about by taking a five week course online. Course study included how life began here on Earth, what scientists are looking for outside of Earth, and the remarkable discoveries and surprises that the future will hold, possibly changing our civilization forever if even a tiny speck of life is found beyond our little home.

I studied microrganisms that live in some of the most extreme environments here on earth, such as the hot pools of water in Yellowstone park or the deep thermal vents in the darkest places of our oceans, some of which can live in temperatures up to 230 degrees Fahrenheit, and how they adapt to those extremes. There are cold-loving microrganisms that thrive in places such as Lake Vostok in Antartica and those that can survive in places such as the Rio Tinto in Spain, which is highly acidic, or Mono Lake in California, which has an alkaline PH of 12.5%. Even in the most extreme environment, such as the orbit of our space station, a cyanobacteria survived for 533 days. While it did not grow, it did survive.  There are stromatolites in Shark Bay, Australia, that are similiar to ones that were on Earth 3.5 billion years ago and these "living fossils" have given scientists a window into our past and helped to make Shark Bay a World Heritage Area.

While many people may not have heard the term "astrobiology", it is actually an ancient science. Ever since Metrodorus of Chios, a Greek Presocratic philosopher, stated "It would be strange if a single ear of corn grew in a large plain, or there were only one world in the infinite", scientists have studied the blackness of space and wondered if we truly were alone in the universe.  The father of astrobiology is widely considered to be Giordano Bruno, who in 1584 wrote "In space there are countless constellations, suns and planets; we see only the suns because they give light; the planets remain invisible, for they are small and dark. There are also numberless earths circling around their suns..."  Unfortunately, Bruno's ideas of space and the universe did not sit well with the church's teachings and he was burned at the stake.  However, the invention of the telescope eventually vindicated his beliefs and though many of the first theories of life on other planets in our solar system were eventually disproved as unfounded and utter nonsense, the science of astronomy took hold of people's imaginations during the Renaissance and beyond, to the fascinating discoveries and achievements that have blossomed unto the scientific stage in the last fifty years.

While astrobiology, originally termed "exobiology", was not always a part of the scientific community, NASA has actually been involved in this field of study since 1960 when they started their first exobiology program. Mariner 4 was the first spacecraft sent from earth in 1965 and it did not show much of anything in the photos we received, which led to a lot of disappointment among scientists. The Viking 1 and 2 landers were the first biological experiments on Mars, but no real microbial life was found, causing a bit of a letdown among the early pioneers of spaceflight.  Optimism about life elsewhere began to wane, but as better technology gave us better spacecraft that began to change and now all of us, scientists and laypersons alike are thrilled with the knowledge streaming to our computers almost daily about new and exciting finds in the universe.  We have sent the Cassini spacecraft to the outer planets, sending back incredible photos of Enceladus, a moon of Saturn, shooting plumes of hydrocarbons emanating from its South Pole region, and finely detailed photos of Saturn's rings. From studying other missions in the solar system, I learned that Triton, a moon of Neptune orbits backwards because it was captured rather than having been formed, and that Titan, one of Saturn's moons, has promising signs of life, with mountains, river valleys and features eroded by wind and rain, but those rivers and rain are comprised of liquid methane so we can't quite set up a station just yet.

We have several telescopes such as Spitzer, Hubble, the Herschel Observatory, COROT, Kepler and the upcoming James Webb Space telescope beaming back amazing pictures of the universe. There are several missions in the future that will give us an even better picture of our solar system with flybys to Pluto and Charon in 2014, the Jupiter Icy Moon Explorer is in the planning stages to explore more of Jupiter's moons, and the Gaia mission will detect thousands upon thousands of extrasolar systems.

The existence of a place outside of Earth that has the building blocks of life is extremely remote and will probably not happen in our lifetime. Yet there is the ever-ending hope that maybe, just maybe a tiny little piece of bacteria will emerge from a place that will inspire a new generation of scientists and astronauts to travel to new and exotic places.

The online class that inspired this post was offered by the University of Edinburgh through the website  www.coursera.org and should be available for signup later this year or early 2014.

Here are a few books and dvd's that may help inspire you to learn about Earth's past and how it may help shape our future:

Wonders of the Universe by Professor Brian Cox

How it Began: A Time-Traveler's Guide to the Universe by Chris Impey

The Fabric of the Cosmos: Space, Time and the Texture of Reality by Brian Greene

Life As We Do Not Know It: The Nasa Search for (and synthesis of) Alien Life by Peter Ward

The Universe in a Mirror: The Saga of the Hubble Telescope and the Visionaries Who Built It by Robert Zimmerman

A Universe From Nothing: Why There is Something Rather Than Nothing by Lawrence Krauss

Life DVD by the BBC/Discovery Channel

Skywatching DVD by The Teaching Company

The Shape of Life: The Complete Journey DVD by Sea Studios