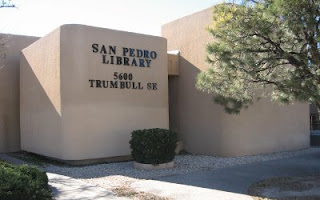 The San Pedro Library was the the 6th branch of the library system, opening in 1967 (not including Old Main, which is now Special Collections). Measuring 7000 square feet, it helped serve a growing local population - 243, 751 Albuquerqueans by 1970. The idea for the branch first germinated in 1961, with construction beginning in 1966. When it opened, it had 7,500 volumes, with a capacity for 25,000 - by 2007, the collection had grown to 57,000 items. In 1967, 4.828 books were checked out by the branch for a two-week checkout; in 2015, San Pedro circulated 116, 485 items for a three-week checkout. The library was renovated in 1999/2000. In 2011, the International Collection  of materials arrived at San Pedro thanks to a campaign spearheaded by Rey Garduño, then Albuquerque's City Councilor for District 6. The collection features materials for adults and children written in Spanish, French, Arabic, Vietnamese and Mandarin languages.