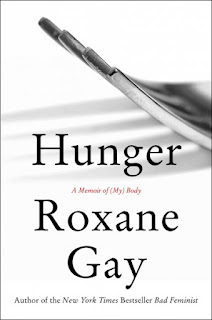 Roxane Gay is a Haitian-American writer, bisexual feminist, arts and culture critic, and a professor of English at Purdue University. I haven't been this moved by a writer since I discovered Alice Walker in the 1980's. Roxane Gay first appeared on my radar with her book Bad Feminist: Essays. Since then, I have enjoyed Difficult Women, An Untamed State, and her latest book Hunger: A Memoir of (My) Body.

Feminism, as defined by the Merriam-Webster dictionary:
1.: the theory of the political, economic, and social equality of the sexes
2.:  organized activity on behalf of women's rights and interests

Feminism is more complex than this definition and continues to evolve with every generation through diversity, ideology, and sociological issues. Roxane Gay's life experiences infuse her writing with a fiercely brilliant prose and elegant clarity. Gay is someone I would want to spend time watching reality television with to benefit from her analysis of what these shows say about our surreal society in between catch phrases such as "I didn't come here to make friends".

Bad Feminist: Essays covers Gay's experiences in academia, women's friendships, gender, sexuality, politics, and racism in America. Her essays about misogyny in popular culture, music, and 50 Shades of Grey had me alternately laughing and wincing inside. Bad Feminist covers racism, rape culture, and envisions an underground reproductive railroad that women may need to resort to in these times that seem to want to force us into a pre-Margaret Sanger time warp. Her humor isn't laugh out loud, but sharp and insightful, making it possible to absorb her points without dissolving into tears of rage and frustration otherwise. This book is the perfect blend of essays that showcase Gay's skills as a cultural critic and intellectual. You can also get a daily dose of her thoughts on her Twitter feed.

I had the pleasure of reading Hunger: A Memoir of (My) Body before reading Difficult Women or An Untamed State. Once I moved on to her fiction after reading Hunger, I was even more impressed with how Roxane Gay has woven her life experiences through fictional characters. An Untamed State was Roxane Gay's first novel about an affluent, privileged Haitian-American woman who is kidnapped for ransom by a band of rapacious criminals. The novel covers the thirteen days of Mireille Duval Jameson's captivity and her father's refusal to pay her ransom. Held captive by a man who calls himself The Commander and his accomplices, Mirelle is raped and tortured in retaliation until she is finally released. Chapters of the book follow her husband's impotent anguish and her father's rationalizations for not saving his daughter. Mirelle's ensuing post-traumatic disorder and recovery speak to a victim's sense of betrayal, devastation, and feeling contaminated by the evil of her perpetrators.

Roxane Gay's fiction, essays, and memoirs area a gift to women who are struggling with compulsive overeating, self-loathing, and our undeniable human needs in a dysfunctional society that expects women to be passive, quiet, decorative, and non-threatening to every insecure, cat-calling misogynist or Internet troll we encounter in daily life. Gay, who survived a gang-rape at age twelve, turned to food in order to emotionally survive her ordeal. She has described this memoir as her most personal and difficult book to write and it is difficult to read, but impossible to put down. Hunger pinpoints the inextricable link between trauma, addiction, and compulsions designed to block out what can't be survived otherwise. While seeking invisibility through excess food and weight, Gay strove for a protection and invisibility from men, but created what she describes as a prison of being physically immobilized and treated as less than human by our vain, superficial culture that coats its cruelty in hypocritical concern, dietary fads, and dangerous weight loss surgery.

Hunger is not a book about triumphant weight loss after a diet or being fifty or even 100 pounds overweight, but what physicians refer to as the range of extreme morbid obesity. Gay discusses the daily indignities she has to confront with airlines, at the gym, and in the grocery store. Her chapter about considering weight loss surgery highlights the dangers of this procedure which makes life in the aftermath sound like an even worse torture than the health hazards of obesity. As a cultural critic, Gay takes on the media's complicity in exploiting people through reality television shows such as The Biggest Loser and analysis of Oprah's public trials and tribulation with weight. Roxane Gay affirms that she "is stronger than I am broken", which gives readers hope that it is possible to live with our bodies in whatever state they may presently weigh, post-traumatic stress disorder, and to transcend cruelty and prejudice through awareness and courageous expression.

For more books on feminism, The Public Library offers the following books:

All the Single Ladies: Unmarried Women and the Rise of An Independent Nation by Rebecca Traister

Excellent Daughters: The Secret Lives of Young Women Who Are Transforming the Arab World by Katherine Zoepf.

Feminism Is For Everybody: Passionate Politics
by bell hooks

Dead Feminists: Historic Heroines In Living Color by Chandler O'Leary and Jessica Spring
Fight Like a Girl: 50 Feminists Who Changed the World  by Laura Barcella


Freedom Is a Constant Struggle: Ferguson, Palestine, and the Foundations of a Movement by Angela Y. Davis

The H-Spot: The Feminist Pursuit of Happiness by Jill Filipovic

The Mother of All Questions by Rebecca Solnit

My Life On the Road by Gloria Steinem


The Supergirls: Fashion, Feminism, Fantasy, and the History of Comic Book Heroines
by Mike Madrid

Why I March: Images From the Women's March Around the World with photographs by Getty Images; editors: Samantha Weiner and Emma Jacobs

Thank you! I just happened on this on the library main page, and really appreciate the review of Roxane Gay's work and the additional suggested readings ... not to mention that it's a piece of cake to just click on a title and place a hold on it at the library. Anyway, keep up the wonderful work, and I'll keep an eye on this blog site that I just discovered!