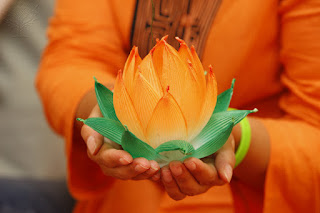 Pema Chödrön, who was born on July 14, 1936, is an American Tibetan Buddhist. She was born Deirdre Blomfield-Brown and is a graduate of Miss Porter's School in Connecticut and the University of California at Berkeley. Pema worked as an elementary school teacher in California and New Mexico and is a mother and grandmother.

When Pema traveled to the French Alps, she met Lama Chime Rinpoche and began her Tibetan Buddhism studies. She began her novitiate as a nun in 1974 and when the Sixteenth Karmapa to England where she was studying, Pema was official ordained.

Pema's most profound and enlightening experiences as a student were with her teacher Chögyam Trungpa Rinpoche, until his death in 1987. In 1984, Pema moved to Cape Breton, Nova Scotia and became the director of Gampo Abbey and established a monastery for Western monks and nuns. Pema teaches in the United States and Canada and has recently completed an extended silent retreat.

Reading Pema Chödrön's books can help people from any faith perspective - or no faith at all, take responsibility for one's feelings, entrenched complexes, and cultivate a compassionate detachment from fear, self-absorption, and delusions. Her wisdom and clarity makes even the most challenging day possible to get through with some compassion and grace. I turn to Pema Chödrön for guidance and to see how a grown-up would handle any situation. Pema Chödrön isn't a perfect person, which she cheerfully owns up to by sharing her own experiences that anyone could relate to. What she holds out is the hope of trying again to get back onto the path when we are lead astray by our pride and expectations.


Always Maintain a Joyful Mind: And Other Lojong Teachings On Awakening Compassion and Fearlessness by Pema Chödrön

Comfortable With Uncertainty: 108 Teachings on Cultivating Fearlessness and Compassion  by Pema Chödrön

How to Meditate: A Practical Guide to Making Friends With Your Mind  by Pema Chödrön

Living Beautifully With Uncertainty and Change by Pema Chödrön

No Time to Lose: A Timely Guide to the Way of the Bodhisattva by Pema Chödrön

Practicing Peace In Times of War by Pema Chödrön


Start Where You Are: A Guide to Compassionate Living by Pema Chödrön


Taking the Leap: Freeing Ourselves From Old Habits and Fear by Pema Chödrön


Training the Mind and Cultivating Loving Kindness by Chögyam Trungpa


The Wisdom of No Escape: and the Path of Loving-Kindness byPema Chödrön