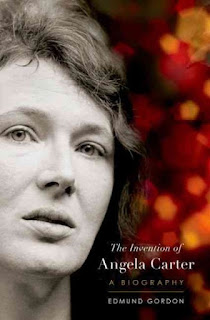 This year has seen the publication of a new book about British author Angela Carter, who was, according to the book's publisher, "[w]idely acknowledged as one of the most important English writers of the last century...[her] work stands out for its bawdiness and linguistic zest, its hospitality to the fantastical and the absurd, and its extraordinary inventiveness and range. Her life was as vigorously modern and unconventional as anything in her fiction." The new book is called The Invention of Angela Carter by Edmund Gordon, and it is heavily based on memories of her contemporaries and her own personal journals.

Not familiar with Angela Carter? She did die in 1992 of cancer aged only 51 - a voice silenced too soon - and is not hugely well known outside of England. Raised in South London, in her late teens she rebelled from a sheltered, overprotected childhood to embrace a lifestyle that included being politically active - she considered herself a socialist and a feminist - and building "a reputation as someone who would say anything and take any risk." Carter worked briefly as a reporter, as a co-editor of a literary magazine, and taught at several universities, but mainly worked ferociously on her own "surprising and transgressive" books, including a book-length essay called The Sadeian Woman. She won a literary prize that allowed her to travel to Japan, where she led a bohemian lifestyle and took up with the first in a succession of younger men. She ended up back in England in the 1970s and had a child at the age of forty-three. Her literary protégés included Salman Rushdie, who called Carter a "benevolent white witch." Margaret Atwood called Carter a "fairy godmother." These kind of otherworldly descriptions have stuck to her posthumous reputation, though she was not overfond of that style of classification in life.

Her fiction, though she began writing with a more socially realistic bent, is "punctuated by extravagant flights of imagination," concerned with "“the social fictions that regulate our lives,” and is often associated with adjectives such as "savage,"  "thorny," and "fantastic."  Perhaps unsurprisingly, Carter was a fan of Wuthering Heights, and her "male romantic leads tend to be feral, violent, and encrusted with dirt." Author Joan Acocella says:

The English novelist Angela Carter is best known for her 1979 book “The Bloody Chamber,” which is a kind of updating of the classic European fairy tales. This does not mean that Carter’s Little Red Riding Hood chews gum or rides a motorcycle but that the strange things in those tales—the werewolves and snow maidens, the cobwebbed caves and liquefying mirrors—are made to live again by means of a prose informed by psychoanalysis and cinema and Symbolist poetry.


It's suggested that Carter's influences ranged from Baudelaire and Rimbaud to science fiction. Sex and autonomy were two of the most notable subjects that she returns to again and again in her writings. Her work was a way of questioning the world around her, and she was very clear that she did not have the answers.

The Bloody Chamber: And Other Stories

Nights at the Circus

About the author: Angela Carter by Lorna Sage [eBook]

Part of the "Writers and Their Work" series, this book is described on Google Books thusly: "Although Angela Carter's work is considered part of the contemporary canon, its true strangeness is still only partially understood. Lorna Sage argues that one key to a better understanding of Carter's writings is the extraordinary intelligence with which she reads the cultural signs of our times. From camp subversiveness in the 1960s to fairy stories, gender-politics, and the theoretical 'pleasure of the text', which she made so real in her writing, Carter legitimized the life of fantasy, and celebrated the fertility of the female imagination more actively than any other writer of her generation. Lorna Sage's study explores the roots of Carter's originality, covering all her novels as well as some short stories and non-fiction."