Hollywood of the Past 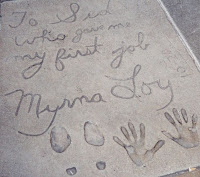 I love the studio era of Hollywood.  There is so much to learn about, so many myths and truths to uncover.  I can't even pick my favorite anecdote of Hollywood lore.  To me they are all fascinating and I become a movie know it all when I watch TCM or any old movie that features my favorite studio actors and actresses.

The studio system of Hollywood is generally considered to have run from the early 1920s through the early 1960s.  During this time movies were made in factory-like production studios who employed nearly everyone from directors to cameramen to people who managed movie theaters around the country.  Movies were made quickly, usually in a matter of a few weeks, and often as cheaply as possible.  Actors rarely did "takes", instead spending more time in rehearsals.  New movies were released every week and shipped to theaters around the country (these theaters were often under contract to movie studios as well) and were often only shown for a week.

Getting a contract with a movie studio was the goal of every Hollywood hopeful although only a few rose to become actual movie stars.  Most contracted players filled became character actors filling small roles or extras filling the background.  Those who caught the eye of the studio bosses were groomed to become glamorous movie stars.  Everything they wore, everywhere they went, everyone they were seen with was arranged by the studios they were contracted under.  Actors rarely had a say in what movies they could or could not act in, they could only negotiate their salaries when their contracts expired, and were placed on suspension when they did not obey the very strict codes of conduct laid out in their contracts, or when they refused to make the movies the studios wanted them to.

The district of Hollywood was also under control of the heads of the studios who had full reign over everything from the press to the police.  Gossip columnists like Louella Parson and Hedda Hopper who wrote for newspapers and magazines were told by the studios what they could and could not publish, and who they had access too.  Many Hollywood scandals and rumors were never written about, since the studios had control over the press.

I was excited this year when two novels came out about this time in history.  The Chaperone by Laura Moriarty, about the woman who accompanied silent screen actress Louise Brooks on a trip to New York City, and Laura Lamont's Life in Pictures by Emma Straub about a small time girl becoming an award winning actress in studio era Hollywood.  I think I set my sights too high though since both of these books left me feeling a little disappointed.  Neither captured the magic of that time, or that place, although I ended up liking The Chaperone very much once I got over the fact that it was (as the title suggests) more about the chaperone, Cora, than about Louise Brooks.  However the library offers many books about the history of Hollywood and lots of DVDs of movies that were made during the studio era.  Here are some suggestions to get you started:


About the history of movies and the people who made them:
Moguls and Movie Stars: A History of Hollywood is a film documentary first aired on the Turner Classic Movie channel about the rise and fall of the studio system.
The Hollywood Studio System by Douglas Gomery gives a wonderful written history of studio Hollywood.
George Cukor: Master of Elegance by Emanuel Levy
Wilder Times: The Life of Billy Wilder by Kevin Lally
He Ran All the Way: The Life of John Garfield by Santa Fe writer Robert Nott (he often writes film reviews for the Pasatiempo, the weekend supplement for the Santa Fe New Mexican) is an interesting look at the actor and producer.
The Red and the Blacklist: The Intimate Memoir of a Hollywood Expatriate by Norma Barzman is a look at the horror of the Hollywood blacklist during the McCarthy era.
.

Books about MGM:
The Golden Girls of MGM and The Leading Men of MGM, both by Jane Ellen Wayne are biographies of the most prominent stars of the studio Metro, Goldwyn, and Mayer. A merging of three smaller studios created the massive MGM in 1924, and it quickly became the biggest and most glamorous studio in Hollywood. The histories portrayed in these books have to be taken with a grain of salt since they feature imagined conversations between the stars (with no way to verify if they actually took place) but it is good reading anyway.
MGM, When the Lion Roars: The Story of a Hollywood Empire is a wonderful film documentary of the infamous studio.
The Lion of Hollywood: The Life and Legend of Louis B. Mayer is a print biography of the head of MGM during the studio era.


The studio system offered glamour on the surface in order to hide the ugly inner workings:
Despite the System: Orson Welles Verses the Hollywood Studios gives an example of one director who rebelled against the studio system.
Rebels on the Backlot: Six Maverick Directors and How They Conquered the Hollywood Studio System by Sharon Waxman is about the end of the studio era.
Corman's World: Exploits of a Hollywood Rebel is a DVD documentary of one of the men who turned the studio system on its head.  Famous for his low budget films Corman is STILL making movies after nearly fifty years in the business!


Other books and movies on Hollywood trivia and scandals:
Cut: Hollywood Murders, Accidents, and Other Tragedies by Dannielle Doggett are the stories behind some of the mysterious deaths of Hollywood.
Frankly My Dear: Quips and Quotes from Hollywood compiled by Shelley Klein
Hollywood Babylon by Kenneth Anger is the ultimate guide to scandals in Hollywood.  Once again, it is hard to tell what is fact and what is fiction, but it is still a deliciously fun book to read.
The Cat's Meow, a fiction DVD based on rumors about Thomas Ince, a movie producer who died while aboard the yacht of newspaper giant William Randolph Hearst. It stars Kirsten Dunst as Hearst's mistress, actress Marion Davies, and Cary Elwes as Thomas Ince.


Unfortunately, the library does not carry copies of these books, but they are worth looking for around bookstores or online, or seeing if they are available for an interlibrary loan:
Uncle John's Bathroom Reader Plunges into Hollywood is a great book of movie trivia.
Leading Ladies: The 50 Most Unforgettable Actresses of the Studio Era and Leading Men: The 50 Most Unforgettable Actors of the Studio Era both by Turner Classic Movies have beautiful photos, biographies, and style tips of different actors.

This is just a short list of great titles the library carries.  You can also view digital copies of movies, especially older classics like film noir and silent movies, on our website.