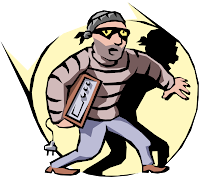 When the book The Art Forger, by B.A. Shapiro came out I was excited to read it since art theft and forgery has always fascinated me.  All my life I have been drawn to books and documentaries about famous art heists.  When Edvard Munch's famous paintings The Scream and Madonna were stolen in 2004 I spent months checking the Internet for details.  The paintings were recovered, the thieves were supposedly identified, but the police have never said how they came about this information.

It is an interesting thing to consider that so many paintings have gone missing and then turned up years later.  For example, the DaVinci's Mona Lisa, was stolen from the Louvre in 1911, taken right off the wall, it what is assumed to be broad daylight.  (It wasn't discovered to be missing right away, so of course, no one really knows when it was taken.) Two years later, the thief tried to sell the painting to the Uffizi Gallery in Florence, Italy where he felt it rightfully belonged.  The painting was returned to the Louvre in France.

For those who are intrigued by these stories, or who have their own fascination with the theft of art, the library offers many books on the subject.  Many of these books have been among my favorites for a long time.


Stealing Rembrandts: The Untold Stories of Notorious Art Heists by Anthony M. Amore and Tom Mashberg
Written by a security director for the Isabella Stewart Gardner Museum, and a Boston reporter, this book goes over every lead the museum followed up on after the infamous theft in 1990.  The interviews with art crooks is one of the best parts of this book.

Museum of the Missing: A History of Art Theft by Simon Houpt
There are some amazing pictures of famous works that have been stolen over the past several hundred years.  Some of it has been recovered, but much of it is still missing, and seeing the full color reproductions of missing art makes it more poignant.

Stealing History: Tomb Raiders, Smugglers, and the Looting of the Ancient World by Roger Atwood
It seems the world has a history of ripping through temples, graves, and galleries, and taking whatever they like best back to their homes which are often on other continents, or ruining what offends them.  This book attempts to document the destruction.

Loot: The Battle Over the Stolen Treasures of the Ancient World by Sharon Waxman
This is a good companion book to Stealing History, as it tells about the fight to bring artifacts back to the countries they have been taken from.

The Lost Museum: The Nazi Conspiracy to Steal the World's Greatest Works of Art by Hector Feliciano
The Nazi's were some of history's worst art thieves, and many works they took are still missing today.  The author attempts to track French collections that were plundered.

Irish Game: A True Story of Art and Crime by Matthew Hart
In The Art Forger, a character briefly mentions that stolen art is used as collateral on the black market.  This book goes more into depth about what that means, following the crimes of Irish mobster Martin Cahill.

The Rescue Artist: A True Story of Art, Thieves, and the Hunt for a Missing Masterpiece by Edward Dolnick
This book reads like fast-paced fiction, with a colorful cast of characters.  Focused mostly on the 1994 theft of Munch's painting, The Scream, which was stolen during the Winter Olympics, this book attempts to explain why art theft is such a problem, and why it's not as glamorous as it seems.


The Art Forger talks about the most famous art forger in history, a man named Han Van Meegeren, who copied Vermeer paintings that later fell into the hands of the Nazis.  These two books explain a little more about his life, his motivations, and the forgery that nearly took this life.

The Forger's Spell: A True Story of Vermeer, Nazis and the Greatest Art Hoax of the Twentieth Century by Edward Dolnick

I Was Vermeer: The Rise and Fall of the Twentieth Century's Greatest Forger by Frank Wynne


There is lots of fiction about art theft, but these ones are my favorites.  You can also search the library catalog under the subject Art Thefts Fiction.

The Mona Lisa Mystery by Pat Hutchins; illustrated by Laurence Hutchins
A juvenile fiction mystery that first piqued my interest in art theft, this is a fun and easy read about a group of school kids who witness the theft of the Mona Lisa painting.

Chasing Vermeer by Blue Balliett
Another juvenile fiction mystery about two kids who embark on a journey to track down a missing Vermeer painting. This is the first of a trilogy, but it is the best one.  (In my opinion.)

Chasing Cezanne by Peter Mayle
The author of travel narratives like A Good Year and A Year in Provence wrote this mystery about a fictional art heist of a Cezanne painting.  His descriptions of France are, as ever, amazing.

Vidalia in Paris by Sasha Watson
A young student goes to Paris to study art, but in order to impress a boy she becomes part of an art-theft ring.  This book is shelved with YA fiction.