HBO's Game of Thrones gallops apace through Season 4!  If you are a fan, we can't recommend highly enough George R.R. Martin's A Song of Ice and Fire books, on which the series is based.  However, if you've already read all the books (we're on tenterhooks for the next title, The Winds of Winter - still no release date listed on Martin's website, but he has been tantalizing us with excerpts!) or perhaps want to skip the books to avoid spoilers, we have compiled a list of some other titles that might tickle your fancy.


Swordspoint: A Melodrama of Manners by Ellen Kushner

A Cruel Wind: A Chronicle of the Dread Empire by Glen Cook [eBook]

Gardens of the Moon: Book One of the Malazan Book of the Fallen by Steven Erikson

The Blade Itself by Joe Abercrombie

Pawn of Prophecy by David Eddings

The Name of the Wind by Patrick Rothfuss

The Eye of the World by Robert Jordan


Looking for more readalikes?  If you search for books from the series in the catalog, you can scroll down past the "Copy Status/ More Details/Find Similar Items"  to find Reader Ratings and Reviews, a list of Books in the Series, and You Might Also Like These...Series, Titles, and Authors! 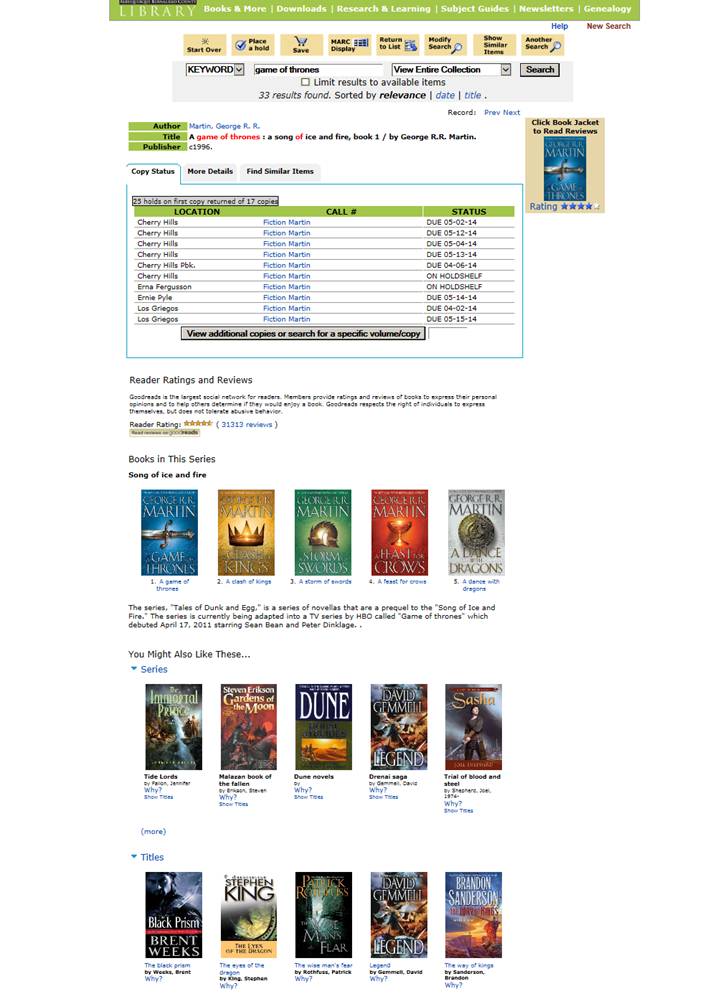 Of interest to Game of Thrones fans


A Game of Thrones - Volume 1: The Graphic Novel by George R.R. Martin

The Hedge Knight: The Graphic Novel by George R.R. Martin

A Feast of Ice and Fire: The Official Companion Cookbook by Chelsea Monroe-Cassel and Sariann Lehrer [eBook]

Inside HBO's Game of Thrones by Bryan Cogman

A Song of Ice and Fire
...audiobooks
...eAudiobooks

What Will Be The Next 'Game of Thrones?' We've Got Some Ideas

Goodreads: Popular Game of Thrones Readalikes
Posted by abcreader at 10:23 AM