Mike Madrid, author of two fabulous books on women in comics, describes himself as "a lifelong fan of comic books and popular culture" on his website. In an interview with the SFGate, he says he was drawn to females in comics because he "felt that they were allowed to have more developed personalities than a lot of the men in comics. A lot of the men had to be brave and fearless, and that was the extent of it, but women could have that and show more emotion." It was while researching his first book, The Supergirls, that he discovered the lesser-known heroines he showcases in his second book, Divas, Dames, & Daredevils.  "The characters are really a snapshot of what the comic book industry was like when it first started at its inception," Madrid says in the same SFGates interview. These forgotten heroines "reflected the very experimental nature of comics in the early days of the medium." Find his fun and informative books in the library catalog:

The Supergirls: Fashion, Feminism, Fantasy, and the History of Comic Book Heroines

A cultural history of comic book heroines. Is their world of fantasy different from our own-- or an alternative saga of modern American women? 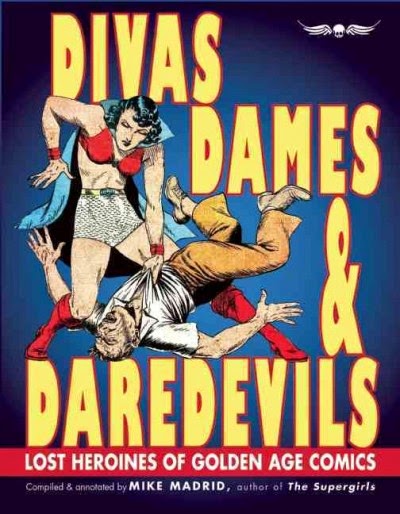 
"After 'Supergirls' was published, I began hearing from readers. Many had no idea that the history of comic books stretched back to the late 1930s.  They told me that reading 'Supergirls' made them want to learn more about the early comics, and specifically about the female characters that appeared in them," Mike Madrid explains in "Golden Years", the opening essay of Divas, Dames & Daredevils. He continues, "While there are a number of heroines I would like to have included in [this] collection...I focused on the ones that I have dubbed as 'lost'. These are characters you may have heard of, but whose stories you never had the chance to read.  Or they may be women who only made a few appearances and then disappeared. They may have been lost, but you will find they are definitely unforgettable."

We are big fans of both these books here at abcreads - hope you will enjoy them too! Fun reads for anybody interested in comics and their history.

Posted by abcreader at 9:54 AM