Geometry & Anguish: The History of Buildings 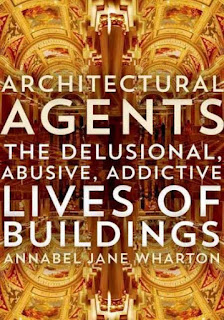 The two elements the traveler first captures in the big city are extra-human architecture and furious rhythm. Geometry and anguish.
~ Federico García Lorca

Merriam-Webster online define architecture as "the art or science of building; specifically: the art or practice of designing and building structures and especially habitable ones; formation or construction resulting from or as if from a conscious act; a unifying or coherent form or structure." Frank Lloyd Wright called it "the mother art," and Winston Churchill asserted, "We shape our buildings; thereafter they shape us." Have you thought about the buildings in your life? You probably have thought about the architecture of your home, if you own it; maybe your workplace, particularly if its construction is awkward or inhibiting; or maybe you are an aficionado of fine buildings. We do live in the city of Bart Prince, with a college designed by John Gaw Meem; the state whose capital features the Santa Fe Downtown and Eastside Historic District and three Archaeological Districts, as well as a distinctive architectural style; the state which inspired Pueblo Revival style. Did you know that Albuquerque's own Main Library was designed in the Brutalist style, and our Central & Unser branch won an award?

On which side do you fall in the form versus function debate? Frank Stella said "Architecture can't fully represent the chaos and turmoil that are part of the human personality, but you need to put some of that turmoil into the architecture, or it isn't real."  The late Zaha Hadid lamented "I wish it was possible to divert some of the effort we put into ambitious museums and galleries into the basic architectural building blocks of society," which we understand to mean that it would be nice if some more pedestrian buildings had been constructed with more imagination and scope. There's a lot to debate in architecture.

We've been thinking a lot about architecture and buildings lately. How are our lives shaped by the architecture around us? What does great architecture contribute to our lives? Skyscrapers are taken for granted now, but once they were daring and strange - how else have buildings transformed our culture? Hence, we've constructed the following booklist to help us understand the history of buildings. As one of the following books is summarized, "The rooms we live in are always more than just four walls. As we decorate these spaces and fill them with objects and friends, they shape our lives and become the backdrop to our sense of self. One day, the houses will be gone, but even then, traces of the stories and the memories they contained will remain."


The Future of Architecture in 100 Buildings by Marc Kushner

The Building of England: How the History of England Has Shaped Our Buildings by Simon Thurley

How Architecture Works: A Humanist's Toolkit by Witold Rybczynski

Bricks & Mortals: Ten Great Buildings and the People They Made by Tom Wilkinson

Good Guys, Wiseguys, and Putting Up Buildings: A Life in Construction by Samuel C. Florman

The Secret Lives of Buildings: From the Ruins of the Parthenon to the Vegas Strip in Thirteen Stories by Edward Hollis

Buildings For Tomorrow: Architecture That Changed Our World by Paul Cattermole

Landscapes of Communism: A History Through Buildings by Owen Hatherley

The House With Sixteen Handmade Doors: A Tale of Architectural Choice and Craftsmanship by Henry Petroski

The Memory Palace: A Book of Lost Interiors by Edward Hollis

Rock the Shack: The Architecture of Cabins, Cocoons and Hide-Outs edited by Sven Ehmann, Robert Klanten, and Sofia Borges

If Walls Could Talk: An Intimate History of the Home by Lucy Worsley

How Much Does Your Building Weigh, Mr. Foster? [DVD]
Posted by abcreader at 7:00 PM