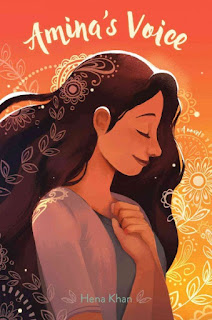 In 2017, Simon & Schuster will launch the first set of children’s and young adult literature from its new imprint, Salaam Reads. Salaam means “peace” in Arabic, and the goal of the imprint is to highlight literature with a focus on Muslim experiences in the U.S. and around the world...  Salaam Reads will publish books that include well-developed, complex characters; themes of identity negotiation and ordinary kid issues; and narratives that are poignant as well as funny—all of which are intended to affirm a wide range of experiences that are specifically Muslim as well as universally appealing.
~Amina Chaudri, "Books and Authors: Talking With Zareen Jaffrey"

We are very interested to check out books from this new imprint! Zareen Jaffrey, the executive editor of Salaam Reads, is interested in sharing the "richness of diversity within the Muslim community that is rarely seen in pop culture," but via stories - books from this imprint "will not contain Islamic education as they’re not a vehicle for teaching Islam; the only requirement for the books on this list is that they have a Muslim main character." There will be about nine releases a year, ranging from picture books to young adult fiction. As Simon & Schuster put it in their press release announcing Salaam Reads, "Children’s books are a fantastic way to get to know our local and global Muslim neighbors." We couldn't agree more, and hope you will take advantage of the new titles in the system, as well as some other Muslim-themed reads recommended by Jaffrey and by library staff.

The Gauntlet by Karuna Riazi


The Night of the Moon by Hena Khan

Dear Malala, We Stand With You by Rosemary McCarney with Plan International

Deep in the Sahara by Kelly Cunnane

The Garden of My Imaan by Farhana Zia

The Turtle of Oman by Naomi Shihab Nye

It Ain't So Awful, Falafel by Firoozeh Dumas

Alia's Mission: Saving the Books of Iraq - Inspired By a True Story by Mark Alan Stamaty
Posted by abcreader at 8:00 AM