A Vast Energy-Broth: Reading Lincoln in the Bardo 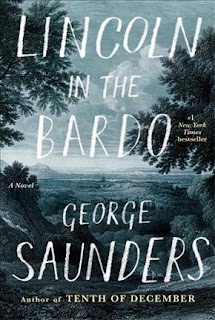 Everything was real; inconceivably real, infinitely dear. These and all things started as nothing, latent within a vast energy-broth, but then we named them, and loved them, and, in this way, brought them forth. And now we must lose them.
~George Saunders, Lincoln in the Bardo

We just finished listening to the audiobook of George Saunders' Lincoln in the Bardo. Seven hours and 166 voices! The magazine Wired says the audiobook "feels like a movie," and we really can't argue with that assessment, particularly as the readers include Susan Sarandon, Julianne Moore, Don Cheadle, Nick Offerman, and Megan Mullally. Author Colson Whitehead called the book "a luminous feat of generosity and humanism."

For those of you who haven't heard of George Saunders' first foray into novel-writing (he was previously known for short stories and essays, particularly the collection Tenth of December), Lincoln in the Bardo is the story of the one night during Abraham Lincoln's presidency, in the first year of the war and after the death of his son Willie, "his parents’ darling" - the Lincolns had four sons, but only one survived to adulthood - but the story is told primarily as an oral history by the residents of the graveyard in which Willie was temporarily interred, Georgetown's Oak Hill Cemetery. The term "bardo" refers to "the transitional state between life and death defined by Tibetan Buddhism." As Saunders was writing the book, he could see a statue of Lincoln from his office at Syracuse University - as he told GQ magazine, "He's in a meditative posture. He's sitting with his legs spread wide and looking down. I would wander out there to kind of remind myself that, you know, he was a real person and that he was a little inclined to depression. Almost like a gut check: ‘Okay, man, I'm still trying to do you justice.’ ”

The book dances between the stories told by residents of the afterworld and historical sources. Saunders cites over 39 sources just in the first 50 pages of the book - in fact, the term op. cit. is employed so many times in the audiobook, we were confused at first, being unfamiliar with that citation. However, not every source is the real deal, though all the quotes go a long way towards evoking Lincoln's era. In NPR's generally favorable review, author Maureen Corrigan takes him to task for his "postmodern" mix of real historical sources and imagined ones - "Throughout Lincoln in the Bardo, Saunders intersperses chapters packed with quotes from historical sources. He gives citations for these historical sources and some are legit — like Doris Kearns Goodwin's book on Lincoln, for instance. But other sources are made up. All the historical passages are tossed together indiscriminately" - while Colson Whitehead argues "Are the nonfiction excerpts — from presidential historians, Lincoln biographers, Civil War chroniclers — real or fake? Who cares? Keep going, read the novel, Google later." What's your take on the issue?

A Washington Post review enthuses, "The quotations gathered from scores of different voices begin to cohere into a hypnotic conversation that moves with the mysterious undulations of a flock of birds."  Passages describing young Willie Lincoln are extremely specific and moving, describing his traits and habits (including blinking from under his bangs, baggy suit, and ceremonial salutes to his father's cabinet), convincing us at first that all the quotes were from real sources. Personally, we have to confess to a little sadness that some of the titles quoted do not exist - we wouldn't mind reading an anthology called White House Soirees, or even the somewhat maudlinly-titled The President's Little Men and Lincoln's Lost Angel, not to mention A Season of War and Loss and Long Road to Glory. But some of the titles quoted do exist, and Lincoln enthusiasts can find several of the books cited by Saunders or related books by the same authors in the library catalog:


Behind the Scenes, or, Thirty Years a Slave, and Four Years in the White House by Elizabeth Keckly


Lincoln and Whitman: Parallel Lives in Civil War Washington by Daniel Mark Epstein, author of The Lincolns: Portrait of a Marriage

Team of Rivals: The Political Genius of Abraham Lincoln by Doris Kearns Goodwin

Not cited by Saunders, but another fictional take on the era that may perhaps be of interest: The Murder of Willie Lincoln by Burt Solomon.

The following titles are not in the library catalog, but might be borrowed using Interlibrary Loan. Interlibrary Loan is a cooperative service among libraries for obtaining materials not available in our catalog. Items requested are located, ordered, and, if available for loan, shipped by mail to the branch library of your choice. Interlibrary Loan service is available to New Mexico residents with full accounts in good standing - simply submit a signed  Interlibrary Loan application form in person at any branch of the the Public Library Albuquerque/Bernalillo County.

With Lincoln in the White House by John G. Nicolay, edited by Michael Burlingame

If you don't want to visit any extra sources, you can still further immerse yourself in the world of Lincoln in the Bardo via virtual reality - experience the graveyard and its inhabitants with the New York Times VR app. But perhaps the novel on its own is enough, as it tussles over "great matters...freedom and slavery, the spirit and the body" while making Abraham Lincoln come alive, tender and tragic, amidst the boisterous shades.