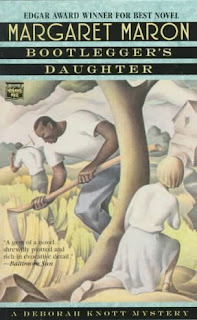 Mystery author Margaret Maron burst onto the scene with the first novel of her Sigrid Harald series in 1981; her Deborah Knott series (for which she is beloved by us) did not begin until 1992. In the intervening years, Maron has won Edgar, Agatha, Anthony & Macavity Awards; been the President of Sisters in Crime; received the Grand Master Award from Mystery Writers of America; and many other accolades.

As of this writing, Margaret Maron has called time on both of her long-running series. She has not ruled out writing stories -which is how her career began 40 years ago -  she is "ready to be done with contracts and deadlines" though she has "learned to never say never." (!) Ohio public radio station WYSO 91.3's Book Nook program has applauded Maron's choice: "Don't you love it when somebody has the good grace to go out at the top of their game?" We'll miss Sigrid and Deborah, but we certainly applaud Margaret Maron's future plans, which include wading into her TBR pile.

If you haven't yet read any of Maron's award-winning mysteries, we encourage you to check them out! She created Sigrid Harald, a homicide detective with the NYPD, based on her experiences living in New York with her husband during the early years of their marriage. Deborah Knott is a North Carolina district judge - the change of setting reflects the author's upbringing "where the Piedmont meets the Sandhills" of that state, though she emphatically declares the character is not based on her own family life. Maron says she chose these professions for her detectives because "Other, more inventive writers can make it seem perfectly logical that a schoolteacher or real estate agent or cookie-baking mom would keep stumbling over murders that they could solve with their civilian skills, but I needed a sturdier reed on which to lean."

Sigrid Harald series
9 titles, with 2 available in the library catalog currently, Fugitive Colors and Take Out (the last 2 books of the series)

Deborah Knott series
20 titles, beginning with Bootlegger's Daughter and ending with 2015's Long Upon the Land

These two characters of have a ying-yang relationship in Maron's mind - she created Deborah to be the opposite of Sigrid in many ways. Interestingly, Sigrid and Deborah are distantly related, and you can view Deborah's family tree - she's the youngest of a family of twelve - on Maron's website. The two detectives meet in Three Day Town, the 17th book in the Deborah Knott series.