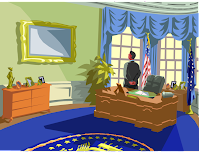 "They are international superstars, and yet they are public servants. We are united by the ideal they represent, but we are often divided by the policies they enact. As the 2012 election concludes, take a look beyond the ballots and past the process."
~Robin Rothman, "Penned by Presidents"

Many of our former presidents have written books.  Most are autobiographies, but a few, such as John F. Kennedy and Jimmy Carter, have written histories, a novel, even poetry.   Some have had their writings collected by editors, such as Harry S. Truman and Franklin Delano Roosevelt.  Since we just finished election season and with the latest Lincoln biopic currently in theaters (based in part on Team of Rivals: The Political Genius of Abraham Lincoln by Doris Kearns Goodwin), we thought this might be a good time to revisit the writings of some of our presidents of recent memory.

#37 Richard M. Nixon
In the Arena: A Memoir of Victory, Defeat, and Renewal

#39  Jimmy Carter
An Hour Before Daylight: Memories of My Rural Boyhood

#41 George H. W. Bush
All the Best, George Bush:  My Life in Letters and Other Writings

#44  Barack Obama
Dreams from My Father: A Story of Race and Inheritance
Posted by abcreader at 11:52 AM