New Year, New You: Clearing Up the Clutter 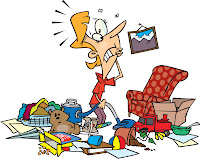 In the new year many of us like to think of getting rid of all the stuff that has accumulated in the house over the year.  Some people hate to see clutter in their house, some people don't mind it. Going through all the old stuff and clearing it out to create space comes easily to some.  Others however, have a much harder time letting go of old things and prefer to keep them around, even if they aren't sure if they have a use for them anymore.  A few of these people even have a compulsion to keep things the rest of us would easily throw away.

In the last few years the term hoarding has been in the mainstream of our culture, thanks to reality shows and documentaries that feature people that hoard everything they come in contact with.  Hoarding is a major problem that makes the living situation of some individuals very difficult.

You may be interested in clearing out your house to prevent yourself from becoming a hoarder in the new year.  The library has many titles to give you a push in the right direction, as well as several titles on the condition of compulsive hoarding.

Books on clearing up clutter in your life:
The Hoarder in You: How to Live a Happier, Healthier, Uncluttered Life by Robin Zasio
Clutter Busting Your Life: Clearing Physical and Emotional Clutter to Reconnect With Yourself and Others by Brooks Palmer
Kick the Clutter: Clear Out Excess Stuff Without Losing What You Love by Ellen Phillips
Cleaning Up the Clutter by Emilie Barnes
10 Minute Clutter Control: Easy Feng Shui Tips for Getting Organized by Skye Alexander
Soulspace: Creating a Home that is Free of Clutter, Full of Beauty, and Inspired by You by Xoren Balbes
Organized Simplicity: The Clutter Free Approach to Intentional Living by Tsh Oxenreider


For futher reading about compulsive hoarding:
Stuff: Compulsive Hoarding and the Meaning of Things by Randy O. Frost and Gail Steketee
Dirty Secret: A Daughter Comes Clean About Her Mother's Compulsive Hoarding by Jessie Sholl
Ghosty Men: The Strange but True Story of the Collyer Brothers, New York's Greatest Hoarders by Franz Lidz


Fiction about hoarding:
The Objects of My Affection by Jill Smolinski
Dirty Little Secrets by C.J. Omololu
Homer and Langley: A Novel by E.L. Doctorow
Posted by lisan. at 12:48 PM