Public Transport: Your Ticket to Adventure 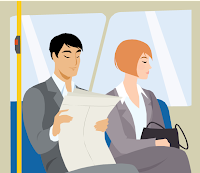 Consider, if you will, travel by public transport - buses, trains, subway. There used to be a kind of romance attached even to these most prosaic, everyday types of travel - think of Claudette Colbert and Clark Gable in It Happened One Night or Cary Grant and Eva Marie Saint in North by Northwest, or Duke Ellington's signature tune "Take the 'A' Train".  Let's take a trip through the library catalog and attempt to rediscover some of the glamour of public transit, or at least find some interesting transport-related titles.

The Subway Chronicles: Scenes from Life in New York edited by Jacquelin Cangro

The Subway Pictures by Peter Peter

Underground, Overground: A Passenger's History of the Tube by Andrew Martin [eBook only in our catalog]

Straphanger: Saving Our Cities and Ourselves from the Automobile by Taras Grescoe

Paris by Metro: An Underground History by Arnold Delaney

Métro Stop Paris: An Underground History of the City of Light by Gregor Dallas

London Under: The Secret History Beneath the Streets by Peter Ackroyd

Also consider the movie Kontroll: "The Budapest subway system, the world's second oldest, is a dark, labyrinthine netherworld as vast and various as the city above it. The beleaguered ticket inspectors or 'controllers', assigned in teams to various sections of the system, have the thankless job to ensure that no passengers ride without paying. This is their story."

Riding the Bus With My Sister: A True Life Journey by Rachel Simon

The Wayward Bus by John Steinbeck

A Bus of My Own by Jim Lehrer

The Lilac Bus by Maeve Binchy

Fiveways by Ian Commins [eBook only in our catalog]

Freedom Riders: 1961 and the Struggle for Racial Justice by Raymond Arsenault

Also consider the movies Bus Stop with Marilyn Monroe and Exils: "A young couple, both of Arabic descent, leave Paris with no money, jobs, or connections, and travel to their ancestral home of Algeria. In search of re-connecting to their roots, they cross three countries by foot, bus, train, and hitched rides."

A Memory of Trains: The Boll Weevil and Others text and photographs by Louis D. Rubin, Jr.

Blood, Iron, & Gold: How the Railroads Transformed the World by Christian Wolmar

Trains of the Old West by Brian Solomon

A Field Guide to Trains of North America by Gerald L. Foster

Luxury Trains: From the Orient Express to the TGV by George Behrend

The Lunatic Express by Carl Hoffman

Ghost Train to the Eastern Star: On the Tracks of the Great Railway Bazaar by Paul Theroux

Mr. Pullman's Elegant Palace Car: The Railway Carriage that Established a New Dimension of Luxury and Entered the National Lexicon as a Symbol of Splendor by Lucius Beebe

Last Train to Paradise: Henry Flagler and the Spectacular Rise and Fall of the Railroad that Crossed the Ocean by Les Standiford

Train Time: Railroads and the Imminent Reshaping of the United States Landscape by John R. Stilgoe

The Blackpool Highflyer by Andrew Martin

Don't miss the DVD Great Trains of America:  Eastern Railroading & Western Railroading  and the Great American Scenic Railroads and Colorado Steam DVD sets.  Also consider Tickets - "An elderly businessman finds solace and a new insight into life when he meets a younger woman, who then arranges his train ticket after his flight is canceled. A young man is torn between an older woman who controls him and a younger one that attracts him. And three Scottish youths on their way to the football match of their dreams are forced to open their eyes and see the bigger picture. In each case, the train journey changes the course of the all their lives" - and I Wish: "Twelve-year-old Koichi, separated from his brother Ryunosuke due to his parents' divorce, begins to believe that Japan's new bullet train service will create a miracle when the first trains pass each other at top speed, and enlists a group of friends on an improbable mission."

10 Things You May Not Know about London's Underground