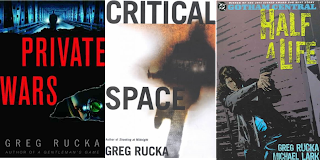 Greg Rucka was born in San Francisco and raised on the Central Coast of California, in what is commonly referred to as ‘Steinbeck Country.’ He began his writing career in earnest at the age of 10 by winning a county-wide short-story contest, and hasn’t let up since...  He is the author of nearly a dozen novels, six featuring bodyguard Atticus Kodiak, and two featuring Tara Chace, the protagonist of his Queen & Country series. Additionally, he has penned several short-stories, countless comics, and the occasional non-fiction essay. In comics, he has had the opportunity to write stories featuring some of the world’s best-known characters—Superman, Batman, and Wonder Woman—as well as penning several creator-owned properties himself, such as Whiteout and Queen & Country, both published by Oni Press.
~from the author's website


Recently at the Albuquerque Comic Expo (ACE), one of abcreads' intrepid readers picked up Greg Rucka's Queen & Country graphic novel, hitherto unknown to her. A graphic novel set in the fictional world of British espionage and featuring a female protagonist?  Yes please!  Imagine our reader's surprise and delight to find many more books by Rucka in the library catalog, including novelizations of Queen & Country, and a movie based on another one of his graphic novels (Whiteout - also featuring a strong female protagonist).

But as you can see below, Greg Rucka does not just write about female spies [Queen & Country] and law-enforcement agents [Whiteout]; there is also his series featuring Atticus Kodiak, professional bodyguard, "notable for their realism and attention to detail, which are partly a product of Rucka's fight training and experience as an EMT", comics, and even a couple of standalones available in the library catalog.  Also of note: Rucka is a four time winner of, and multiple nominee for, Eisner Awards (given for creative achievement in comic books).  If you enjoy intricately plotted, suspenseful, gritty adventure stories (check out the author on NoveList Plus!), please join us reading some of Greg Rucka's oeuvre today!

Movie based on comic

Whiteout
Posted by abcreader at 12:31 PM