What to Read Now That You've Read Gone Girl

By now, seems like every mystery and thriller lover in the United States has read Gone Girl (or least, all the ones in our library system).  What to read next?  What's this summer's Gone Girl? These are the kinds of questions librarians get every day.  Here's one way to answer them...

NoveList Plus describes the novel as 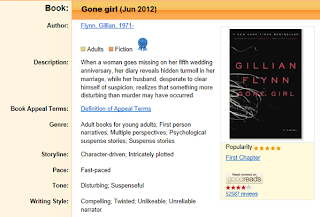 Most readalike lists that you'll find will build off of genre or tone, giving you a list of books that are also "psychological suspense".  Others will take elements of the plot such as "unreliable narrator" or major themes of the story to create a list of similar books.  It all depends on the kind of novel you enjoy!

You can also try readalikes by author.  NoveList also recommends, in its "You Might Also Like These..." feature in the Gone Girl library catalog record (scroll down to the bottom of the page), authors such as Tana French ("both French and Flynn write dark, literary suspense stories...[with] extremely flawed narrators..."), Erin Kelly ("keen insight into troubled characters"), Minette Walters ("Disturbing, Suspenseful, and Compelling"), and Michael Robotham ("Disturbing, Suspenseful, and Character-driven").

Here is a list of some likely contenders for a place on any mystery-lover's bookshelf, but particularly if you enjoyed Gone Girl:


Most titles were suggested by a magazine insert created by Check Me Out.