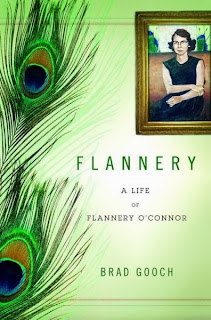 You shall know the truth and the truth shall make you odd.
~Flannery O'Connor

The author Flannery O'Connor is enjoying a bit of a second literary life in the past couple of years, as interest in her writing and her person is once again on the rise.  O'Connor, who died in 1964 at the tender age of 39 of systemic lupus erythematosus, only wrote two novels (Wise Blood, The Violent Bear It Away) and two short story collections (A Good Man Is Hard to Find, Everything That Rises Must Converge) before her untimely death, but her literary legacy has stretched across the ensuing years.  Her Complete Stories won the 1971 National Book Award, and volumes of her letters (The Habit of Being) and some of her occasional prose (Mystery and Manners) had already been published posthumously. O'Connor's appeal doesn't seem to wane with time - she's been back in the news in 2012 - 2013 with the publication of some of her early cartoons and a prayer journal she kept as a student.

We here at abcreads are fans of Flannery O'Connor's rigorous and darkly humorous "Southern Gothic" writings dating back to our own school days, and hope you will join us in checking out some of the latest fiction, non-fiction, and literary criticism featuring one of America's greatest writers, who described herself thusly in one of her letters: "I don't deserve any credit for turning the other cheek as my tongue is always in it."

Reveals that author Flannery O'Connor originally wanted to be a cartoonist and collects her early comics, which display many of the story-telling techniques that she later used in her writing. Collects cartoons which originally appeared in the Peabody Palladium, the student newspaper of Peabody High School in Milledgeville, Ga., and four publications of Georgia State College for Women, the Colonnade, the Alumnae journal, the Corinthian, and the Spectrum.

A Prayer Journal by Flannery O'Connor; edited and with an introduction by W.A. Sessions

“I would like to write a beautiful prayer,” writes the young Flannery O’Connor in this deeply spiritual journal, recently discovered among her papers in Georgia. “There is a whole sensible world around me that I should be able to turn to Your praise.” Written between 1946 and 1947 while O’Connor was a student far from home at the University of Iowa, A Prayer Journal is a rare portal into the interior life of the great writer. Not only does it map O’Connor’s singular relationship with the divine, but it shows how entwined her literary desire was with her yearning for God. [from the book blurb]

The Terrible Speed of Mercy: A Spiritual Biography of  Flannery O'Connor by Jonathan Rogers [eBook]

In this biography, Jonathan Rogers gets at the heart of O'Connor's work. He follows the roots of her fervent Catholicism and traces the outlines of a life marked by illness and suffering, but ultimately defined by an irrepressible joy and even hilarity. In her stories, and in her life story, Flannery O'Connor extends a hand in the dark, warning and reassuring us of the terrible speed of mercy.


Flannery: A Life of Flannery O'Connor by Brad Gooch

An engaging and authoritative biography of Flannery O'Connor, who despite the chronic disease that eventually confined her to her mother's farm in Georgia, managed to fundamentally change the landscape of American literature with her fierce, sometimes comic novels and stories.

Years after poor health forces her to return to her family home, author Flannery O'Connor reluctantly attends the wedding of her cousin and inadvertently draws the attention of the groom, a wealthy Manhattan resident who fears life is passing him by.

A collection of analyses on literature, art and music by the award-winning author of The Women shares cultural, meditative insights into race, gender and history that encompass a diverse range of subjects from Truman Capote and Louise Brooks to Malcolm X and Flannery O'Connor.


Note: all book descriptions are taken from the library catalog, unless otherwise noted.
Posted by abcreader at 12:58 PM

The library doesn't have it, but The Province of Joy: Praying with Flannery O'Connor by Angela Alaimo O'Donnell (Paraclete Press, 2012) is an excellent daily prayer guide, using excerpts and themes from Miss Flannery's writings.

Another one we don't have, but which is excellent and well-written: Ralph Wood's, Flannery O'Connor and the Christ-Haunted South (Eerdmans, 2005).

And another I like to consult, when I'm trying to grasp a particular story -- and what a great subtitle: Flannery O'Connor: A Proper Scaring by Jill Pelaez Baumgaertner.

Living in or knowing the South can definitely help one to grasp O'Connor's grotesque, but these three books help readers to see the grace beneath.