July 30, 2014 marks the fiftieth anniversary of the death of Erna Fergusson. ABC Library remembers Fergusson as an ally, a pioneer, and a patron in the best sense of the word. The cultural and intellectual growth of Albuquerque’s citizens mattered to Fergusson as much as the growth of its streets and subdivisions. Her staunch support of Albuquerque’s libraries ensured that as the city grew, its libraries did, too.

Erna (Ernestine Mary) Fergusson was born in 1888. Her grandfather, Franz Huning, was one of three key players who brought the railroad to Albuquerque. Her mother, Clara Huning Fergusson, was active in civic affairs, and her father, Harvey B. Fergusson, served from 1912 to 1915 as congressman for the newly-admitted state of New Mexico.

Among her varied careers, Fergusson taught, worked for the Red Cross home service, reported for the Albuquerque Herald newspaper, ran Koshare Tour Services, and wrote several books. Her occupations always served her principal preoccupations -- her passion for the unique beauties of New Mexico, and her faith in “New Mexico’s extraordinary opportunity to make of its diverse heritages a richly patterned and truly democratic community.”  (New Mexico: a Pageant of Three Peoples, p.264.)

When it came to Albuquerque’s public libraries, Fergusson was both historian and advocate. She remembered the library ball, an early fundraising effort by the Ladies’ Library Association. She was an adolescent witness to the battle over moving the library from the Commercial Club to the Raynolds building in 1901, and she was instrumental in the campaign to build a new library (now Special Collections)  in 1925.

Of the rebuilding of Albuquerque’ first public library she recalled the argument that persuaded Clyde Tingley that the fire-damaged Raynolds building should be demolished and a new library built on the same site:

“The chairman of the City Commission at the time was a very picturesque gentleman who had no books and naturally saw no point to anyone else having them. But he was a builder – he liked building – that interested him, and he said to me one time, ‘You know, I seen all that stone in that old Raynolds Building and I just thought wouldn’t that make a good fire station.’ So he put it to the City Commission that way, and the City Commission agreed that a new Fire House would be fine, and you couldn’t get any better stone than tearing down that old library. Then there was going to be a pile of bricks which they might as well use to build a new library.”  (“Libraries in the Southwest: Their Growth – Strengths – Needs.” UCLA Library Occasional Papers. Number 3. 1955.)

Fergusson led the call to rebuild the library in the Pueblo Revival style: “It will be as good an advertisement for the town as the Alvarado and Franciscan [hotels] have proven to be in the past.” (New Mexico State Tribune, June 19, 1924). Albuquerque was fortunate that she and her supporters prevailed – the Alvarado and the Franciscan are long gone, but the library is still in business.

Erna Fergusson understood that it took persistence and hard work to build a library – not so much to build the edifice, but to solve the “terrific problem: how to make people realize that money invested in books … is a good investment in the town.” (“Libraries in the Southwest: Their Growth – Strengths – Needs.” UCLA Library Occasional Papers. Number 3. 1955.) For forty years, she lent her support as the Albuquerque Public Library on Edith and Central grew into a library system with six locations and bookmobile service to the unincorporated areas of Bernalillo County.

The Friends for the Public Library, the Albuquerque Public Library Foundation, and the Library Advisory Board continue Fergusson’s efforts to address the “terrific problem”.  Albuquerque dedicated its seventh library to her memory when it opened Erna Fergusson Library on April 3rd, 1966. The library named in Fergusson’s honor remains one of ABC Library’s busiest, liveliest branches – and that may be the best tribute we can offer her. 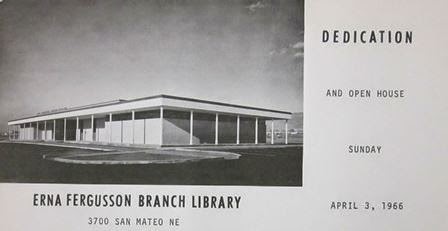 Dedication Card for Erna Fergusson Library
For a more complete account of Fergusson’s life, check out Robert Gish’s Beautiful Swift Fox.
Posted by abcreader at 8:30 AM