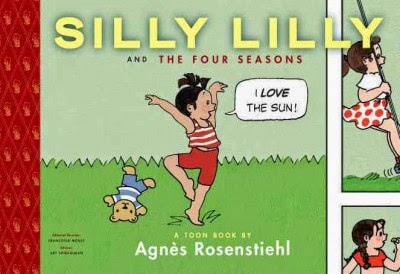 “Don’t be suspicious of something just because kids love it.”
~Françoise Mouly

Have you seen TOON Books and TOON Graphics in stacks? They're not just another publishing house! Françoise Mouly, art editor at The New Yorker, founded TOON Books as "a whole new approach to books for beginning readers—a rethinking as radical as the first time Theodor Geisel put a hat on a cat."*

Ms. Mouly grew up in France reading comics such as the Asterix series by René Goscinny, and when she came to the United States in the 1970s, taught herself English by reading comics. She is married to cartoonist Art Spiegelman, author of Maus, and together they co-founded, co-edited, and co-published the comic magazine Raw in the 1980s. When Mouly and Spiegelman had children, they realized how difficult it was to find good comics in English for children - so they started the Raw Junior imprint, which publishes the Little Lit anthologies, whose contributors include Neil Gaiman and Lemony Snicket. This led Mouly to create TOONs.

TOON books are comics for children as young as 3. Some are listed as Easy in the ABC Library catalog, indicating that they are picture books; others are Easy Readers, for the kids who are just beginning to read by themselves. TOON Easy Readers are marked as as "Easy to Read Comics" or "Toon Into Reading", and on the back a reading level will be listed (interestingly, on their website, the levels are defined by both "reading level" - such as grades K-2 - and "interest level" - ages 3+) . TOON graphics are aimed at 4th graders and older - what you would find in J Fiction in the library stacks. Each TOON book has been reviewed by educators (checking the language and story), and many TOON books are on recommended reading lists, including those published by the American Library Association.

For those who are not convinced that kids reading comics is a good thing, the TOON website* assures us:


Comics have always had a unique ability to draw young readers into a story through the drawings. Visual narrative helps kids crack the code that allows literacy to flourish, teaching them how to read from left to right, from top to bottom. Speech balloons facilitate a child's understanding of written dialogue as a transcription of spoken language. Many of the issues that emerging readers have traditionally struggled with are instantly clarified by comics' simple and inviting format.

So if you see a TOON book in the stacks, why not give it a try?  Here's a sampling of TOON titles available in the library catalog:

Tippy and the Night Parade by Lilli Carré

Benny and Penny in the Big No-No! by Geoffrey Hayes

Silly Lilly and the Four Seasons by Agnes Rosenstiehl


You can easily find more of these books in the catalog with a keyword search using "Toon book" or "Toon graphic".