The Siren Song of Life Beneath the Sea: Mermaids for All Ages 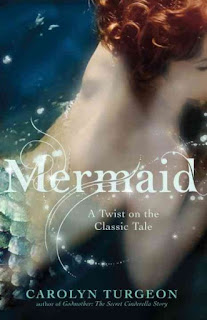 Sometimes, it must be said, mermaids are men. But most often they are women, and they are almost culturally universal: known as sirens, water spirits, selkies, ceags, they exist in the ubiquitous waters of our imaginations, and within our imaginations, under the churning sea. Complicated, fishy, witchy women, both lucky and unlucky. They save men and they destroy them; they make wonderful lovers and terrible wives.
~Lyz Lenz, "The Eternal Allure of the Mermaid"

Water is necessary, urgent, everywhere; it gives rise to life. It is also perilous, subject to its own laws, and contains dark and hidden depths... The myth of mermaids both explains and distances woman, that great and confounding mystery. And the appeal isn’t just for men; girls are drawn to mermaids’ wildness and beauty and power. After all, the sea creatures are the ones who get to decide if people who fall overboard will swim or sink.
~Lauren Groff, "Daughters of the Springs"

There are certainly a lot of people out there fascinated by the idea of mermaids. There are mermaid legends from around the world! Even in modern days, author Carolyn Turgeon has a blog called "I am a mermaid", and you can read her article "Neither Fish Nor Flesh" over at The New Inquiry. Entertainment Weekly called 2011 "The year mermaids swim into movies, books, fashion, and maybe your local swimming pool." You can read about "Becoming Mermaids" at the American Museum of Natural History website or as part of the Mariners' Museum's "Women & the Sea". You can have mermaids entertain you at your next party, or just go to visit the Mystic Mermaids in Denver, Canada's Halifax Mermaids, Aquarena Springs in Texas, the Austin Aquarium (Saturdays and Sundays only!), and "The Only City of Live Mermaids" in Florida - or take part in Coney Island's Mermaid Parade. (We also found a whole article devoted to "making your living as a mermaid".) There's even a Mermaid School, we've heard, and Mermaid Exercise, sometimes called "mermaiding." The National Ocean Service has a webpage called "Are mermaids real?"; Animal Planet's faux-documentary, Mermaids: The Body Found, was "Animal Planet’s most watched program until the sequel trumped it." There's a mermaid environmental movement. You can knit yourself a mermaid-tail blanket or adopt "mermaid style" for the times you need to spend outside the water - preferably while reading Mermaids and Mythology magazine.

Our own interest in mermaids began with reading Andersen's "The Little Mermaid" (though not fans of the Disney film) and seeing Copenhagen's famous statue, so we'd like to point out that the trend continues in literature. We've put together a list of mermaid fiction for all ages for those intrigued by the sirens of the seas. Sometimes the heroines of the tail (we couldn't resist!), sometimes a character in a larger story, we hope that these stories of mermaids don't send you off the deep end.

The Sea Tiger by Victoria Turnbull

The Tail of Emily Windsnap by Liz Kessler

Above World by Jenn Reese

The Mermaid and the Shoe by K. G. Campbell

Oliver and the Seawigs by Philip Reeve and Sarah McIntyre

Girl at the Bottom of the Sea by Michelle Tea

Lies Beneath by Anne Greenwood Brown


The Vicious Deep by Zoraida Cordova

Into the Deep by Missy Fleming [eBook]

Between the Sea and Sky by Jaclyn Dolamore


The Mermaid's Secret by Katie Schickel

Case of the Fickle Mermaid by P.J. Brackston


The Sea House by Elisabeth Gifford

The Mermaid of Brooklyn by Amy Shearn [eAudiobook]

Bay of Sighs by Nora Roberts


Sailor Twain: Or, the Mermaid in the Hudson by Mark Siegel

Mermaid: A Twist on the Classic Tale by Carolyn Turgeon


For more mermaid tales, try a subject search of "Mermaids - Fiction". Read more articles about mermaids on Huffington Post! Also, check out this Cochiti potter's clay mermaid, for a bit of local flavor!