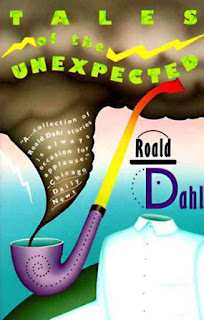 This year marks the centenary of one of our favorite authors - Roald Dahl! How will you be celebrating Roald Dahl Day today? It's not too late to download a party pack if you want to get in on the festivities.

We discovered the magic of Roald Dahl's books for children in third grade, when our teacher read James and the Giant Peach aloud to us on Friday afternoons while we sat at our desks. In these days of binge-watching, it's hard to imagine waiting a week to find out would happen in the next chapter, not to mention creating the world in our imaginations with no help from the movie based on the book, all the while quietly sitting and listening.

Another childhood favorite was Charlie and the Chocolate Factory. No less than author J. K. Rowling named this a top ten book that every child should read. To this day, every time we eat a bar of chocolate, we try to eat it Charlie-style, in little bites to make it last. Unfortunately, we don't have Charlie's willpower!

But Roald Dahl didn't only write for children - he wrote short stories for adults, memoirs, and two screenplays, for Chitty Chitty Bang Bang and You Only Live Twice. Among his other accomplishments, he flew for the RAF in WWII; helped develop the Wade-Dahl-Till shunt when his son was in an accident that caused secondary hydrocephalus, which required fluid drainage; the treatment he helped devise to coach his wife Patricia Neal to regain speech after a stroke is still advocated by some today, though it's also been called "a grueling (some said cruel) rehabilitation regimen."

Roald Dahl the writer created some of the world's most beloved books; as a person, he had issues. Noel Coward said of Dahl: "The stories are brilliant and the imagination is fabulous. Unfortunately, there is, in all of them, an underlying streak of cruelty and macabre unpleasantness, and a curiously adolescent emphasis on sex." Other accounts of him include "world-historically unpleasant" and "mendacious, controlling, thin-skinned, self-righteous, bullying, boastful and vile to colleagues and family alike" though he could "at times, be thoughtful and charming...he responded to family crises with almost incredible courage and ingenuity." But, as Dahl himself was the first to admit, "Grown ups are complicated creatures, full of quirks and secrets."

You are probably familiar with Dahl's works for children (maybe you have your own memories of being introduced to his oeuvre? Let us know in the comments!), but here's a list of some of his titles for mature readers which are available in the library catalog, and some links that might interest Dahl fans.

The Best of Roald Dahl

Skin and Other Stories

Roald Dahl's Tales of the Unexpected

Beware of the Dog [eAudio]

The Irregulars: Roald Dahl and the British Spy Ring in Wartime Washington by Jennet Conant

Storyteller: The Authorized Biography of Roald Dahl by Donald Sturrock

In Honor of Roald Dahl's 100th Birthday, Dinner With The Twits [Vogue]

The Wonderful, Terrible Power of Food in Roald Dahl [Slate]

Nineteen of Roald Dahl's Most Important Food Inventions [Lucky Peach]
Posted by abcreader at 8:00 AM