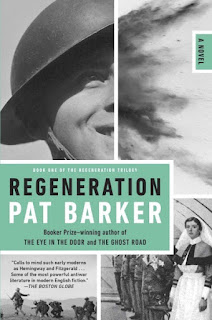 "I think the whole British psyche is suffering from the contradiction you see in [Siegfried] Sassoon and Wilfred Owen, where the war is both terrible and never to be repeated and at the same time experiences derived from it are given enormous value... No one watches war films in quite the way the British do."
~Pat Barker, quoted in "Warring Fictions" by John Ezard

Pat Barker is a Man Booker Prize-winning British author.  Her two trilogies are both set in and around WWI - she turned to this topic after writing her first three novels, which, though well-received, have not had the popularity of her later books, particularly the Regeneration Trilogy, the first book of which was turned into a movie in 1997. Brought up primarily by her grandparents, her reasons for choosing WWI as a subject include both rebellion and acceptance:


I think in this country, in particular, I felt I had got myself into a box where I was strongly typecast as a northern, regional, working-class, feminist—label, label, label—novelist. It's not a matter so much of objecting to the labels, but you do get to a point where people are reading the labels instead of the book. And I felt I'd got to that point. And also, I'd always wanted to write about the First World War. One of my earliest memories was of my grandfather's bayonet wound and his stories of the First World War.

Pat Barker describes her voice as having an "earthiness and bawdiness." Her writing has also been described as "no metaphorical flourishes, but..highly wrought" with a "perfect pitch for dialogue." Michael Gorra, in a New York Times review, rhapsodizes over the Regeneration Trilogy:


Those novels stand among the greatest achievements of contemporary fiction, demonstrating an unrivaled understanding of the psychology of physical trauma and a mastery of historical detail, whether of hospital life, London’s homosexual demimonde or the trenches themselves. They are demonic and inspired.

If you enjoy character-driven historical fiction, "resonant fiction that will stay with readers long after they're done," why not give Pat Barker a try? Here's a list of her books available in the library catalog:

The Eye in the Door

Double Vision
Posted by abcreader at 8:00 AM