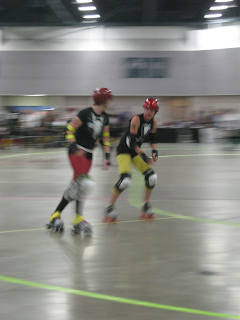 ﻿Pippi Longshocking & the Merciless Scrapper here.  At least, those would be our monikers if we were derby girls.  Instead, we are just hardcore fans, writing to tell you how much we love roller derby & why you should check out the Duke City Derby! 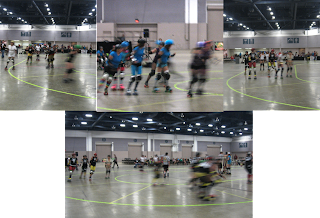 We went to see the roller derby last Saturday & had a blast as usual!  There were 2 bouts, the Hobots vs. the Taos Whiplashes & the D.I.A. vs. the Santa Fe Discobrawlers.  We love to watch Maria von Scrapp, 67 Stitchez,  C. Anemone, Spittin Venom, Tronsexual, Killer Queen , & all the rest do their thing! Watching both bouts, we were there from 6 - 10 p.m.  Yes, we are the dedicated derby fans who stay for the whole four hours! Both bouts were really close to call-in the second bout, the Discobrawlers came from 50 points behind to nearly tie the D.I.A.-& we were on the edge of our seats a lot of the time. For some more photographs, visit Flickr: Taos vs. Hobots & Hobots vs. Taos Whiplashes (two different albums of Saturday's bout).
Want to know more about roller derby in New Mexico? From the Duke City Derby website: "Duke City Derby began in August of 2005 with 10 determined skaters and a head full of dreams. Flash forward to 2011 and DCD is 4 teams strong with DIA and the Hobots representing ABQ, the Santa Fe Disco Brawlers and Taos Whiplashes. The All Star Munecas Muertas, DCD's travel team previously went into the WFTDA Western Regional Tournament ranked 17th in the nation and took out the #1 ranked team to earn a trip to the WFTD National Championship!"
The season is already underway, but goes on until October, so take a look at Duke City Derby 2011 Season Schedule to see what bouts you'll be able to take in!
For the rules of roller derby (Merciless & I are still figuring these out!), you can visit the WFTDA Standardized Flat Track Roller Derby Rules, or the Duke City Derby site has the short & sweet version.

We couldn't not give a shout out to our favorite player, Conan the Librarian of the Taos Whiplashes! &, while we're talking librarians, don't forget to check the library catalog for these derby related items:

Down and Derby: The Insider's Guide to Roller Derby by Alex Cohen and Jennifer Barbee 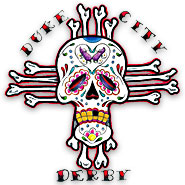 Want to be a derby girl? DCD holds weekly open practices for any interested men and women ages 18 and older. Check out the practice schedule here.  The Duke City Derby is also looking for referees & is starting a junior league!