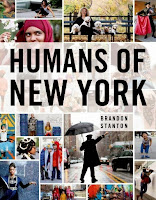 New York is the meeting place of the peoples, the only city where you can hardly find a typical American.
~Djuna Barnes

The true New Yorker secretly believes that people living anywhere else have to be, in some sense, kidding.
~John Updike

New York, New York!  Love it or hate it, there's no place like it, and its five boroughs are jam-packed with denizens sporting some of the biggest personalities you'll ever see.   We recently read the excellent Humans of New York - author Brandon Stanton's "photographic census", with its portraits and captions that capture "glimpses into the lives of strangers in New York City" (you can also visit his website), and it got us thinking about all the characters you can find in "the City". Here's a smattering of our favorite representatives of the Big Apple - if we've missed your favorites, let us know in the comments!

Kitchen Confidential: Adventures in the Culinary Underbelly by Anthony Bourdain

Garlic and Sapphires: The Secret Life of a Critic in Disguise by Ruth Reichl

Goodbye To All That: Writers on Loving and Leaving New York edited by Sari Botton

Through the Children's Gate: A Home in New York by Adam Gopnik

Lives of the rich and famous

Empty Mansions:  The Mysterious Life of Huguette Clark and the Spending of a Great American Fortune by Bill Dedman and Paul Clark Newell, Jr.

Mrs. Astor Regrets: The Hidden Betrayals of a Family Beyond Reproach by Meryl Gordon

Them: A Memoir of Parents by Francine du Plessix Gray

Shocked: My Mother, Schiaparelli, and Me by Patricia Volk

Reverend Billy and the Church of Stop Shopping

What Should I Do If Reverend Billy Is In My Store? by Bill Talen

What Would Jesus Buy? [DVD]

My Korean Deli: Risking It All For a Convenience Store by Ben Ryder Howe

Inside the Dream Palace: The Life and Times of New York's Legendary Chelsea Hotel by Sherill Tippins

A Voice From Old New York: A Memoir of My Youth by Louis Auchincloss

Party of the Century: The Fabulous Story of Truman Capote and His Black and White Ball by Deborah Davis

Lucking Out: My Life Getting Down and Semi-Dirty in Seventies New York by James Wolcott