Puzzles were taken from the New York Times Archives and the fastest correct completer from each round moved on to the finals.

Congrats to Jennifer and Jason, our stellar final round contestants.  Below you can see them locked in a dead heat for the grand prize: 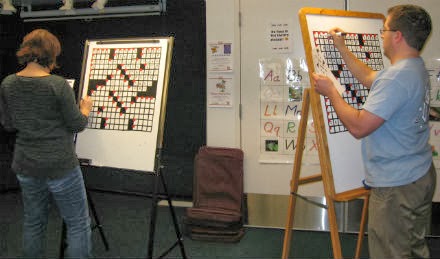 Both their puzzles were correct, but Jason came in a hair before Jennifer to claim the title.

Here's a close up of the winning puzzle. 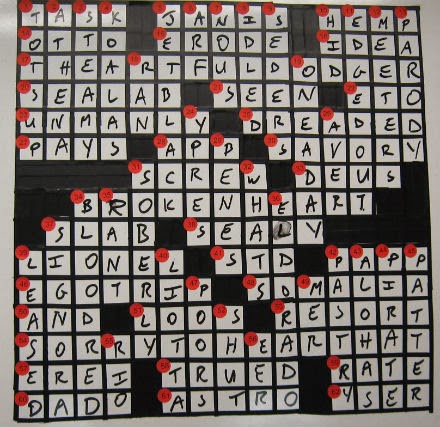 Many thanks to all who participated!

The Library has books on puzzles, as well as novels featuring puzzles and movies.
For a fun cinematic look into crossword culture, there's Wordplay.

Nero Blanc and Parnell Hall are two mystery authors who feature crosswords.
The first of Nero Blanc's Belle Graham series is The Crossword Murder.
Parnell Hall's first in the series is A Clue For The Puzzle Lady (also available electronically).

If you're looking for puzzle books, but not necessarily crosswords, we have:
Sudoku Easy To Hard
Sudoku 200 Fun and Challenging Japanese Number Puzzles
The Sudoku Book

Mystery authors who feature Sudoku include Kaye Morgan, Parnell Hall and Shelley Freydont.  Some of their series begin:
Murder By Sudoku
The Sudoku Puzzle Murder (a continuation of her crossword puzzle series)
The Sudoku Murder

The American Crossword Puzzle Tournament is in the beginning of March and information can be found on their website.
Posted by dullibrarian at 10:18 AM