"He is a good and smart master and he made me this collar so that I may speak.  SQUIRREL!" - Dug from "Up." 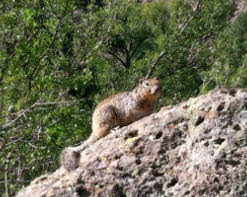 Tuesday, January 21, marks National Squirrel Appreciation Day.  The National Wildlife Federation brings 7 ways to celebrate this often maligned mammal.  New Mexico numerous squirrel varieties, including the Rock Squirrel (pictured above) and Abert's Squirrel.  To look at a complete list, New Mexico Game and Fish has a key.  For Squirrel Appreciation of a whole different sort, the Missouri Department of Conservation does have recipes.

Squirrels are well represented in the library's collection.

No Squirrel Appreciation Day would be complete without mentioning Scrat from "Ice Age".

Posted by dullibrarian at 11:55 AM