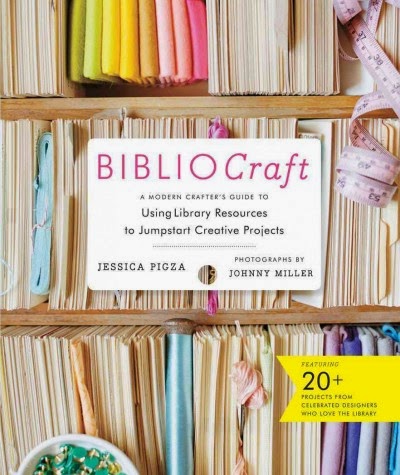 Jessica Pigza, a rare book librarian and assistant curator of the New York Public Library's Rare Book Division, has written a book that serves as both a lovely introduction the library and a fun assortment of crafting ideas. Her book, Bibliocraft: A Modern Crafter's Guide to Using Library Resources to Jumpstart Creative Projects, begins with a guide to different kinds of library collections, finding the right library for you, planning your library visit, finding what you want at the library, digital libraries, and recommended library collections.  Pigza then touches on the different types of libraries (branch library, research library, special collections), library cards, fees, how to search the library catalog (both Library of Congress Classification and Dewey Decimal classification, which is what the ABC Library catalog uses), and more.

The craft projects inspired by the library include fabric pouches, decorated paper, cross-stitch wall panels, and votive holders.  Each project is listed in the category which inspired it - children's books, illuminated manuscripts - and each project lists its more specific inspiration - for instance, the Kittens Pockets Dress was inspired by Johanna Spyri's Heidi.

It's a beautiful book and we recommend it highly!  It also inspired us to search some unusual library collections and see if we could find craft projects that seemed to be a match for those collections.


Whitby Museum and Library
The Museum, our library and archives are run by our parent organisation. This is The Whitby Literary and Philosophical Society. The Society was founded in 1823 by a group of leading Whitby citizens led by the Rev. George Young, the author of the classic nineteenth century "History of Whitby" (1819) and minister at the Presbyterian Church. The chief object of the Society was to setup and maintain a museum, specialising in fossils, since "Whitby is a chief town of a district abounding with petrifications and containing not a few Antiquities". Ever since Whitby Museum has been run for the people of Whitby by the people of Whitby.
~from their website
Whitby is also the backdrop for Bram Stoker's Dracula and the museum contains some suitably creepy relics such as the "Hand of Glory".
Project: Pocket Nosferatu from Creepy Cute Crochet: Zombies, Ninjas, Robots, and More! by Christen Haden


VATNASAFN / LIBRARY OF WATER
VATNASAFN / LIBRARY OF WATER is a long-term project conceived by Roni Horn for a former library in the coastal town of Stykkishólmur in Iceland. The building stands on a promontory overlooking the ocean and the town, and houses three related collections - of water, words and weather reports - which reflect Roni Horn’s intimate involvement with the singular geography, geology, climate and culture of Iceland.
~from their website
Project: Exploration Bottles


The Desert Libraries of Chinguetti
"As recently as the 1950s, Chinguetti was home to an impressive thirty family-owned libraries, but severe drought saw the town’s residents disappear, taking their books passed down from generations with them. Today there remains less than ten libraries in the old town, catering to scholars that occasionally visit the isolated town, but mostly to tourists who pass through to see the priceless texts and experience a traditional nomadic hospitality of the Mauritanian desert."
~from MessyNessyChic
Project: How To Make A Tunnel Book