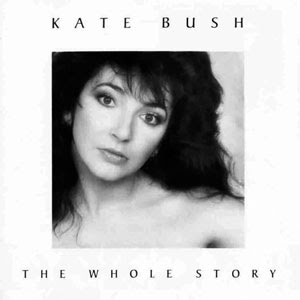 If you are a music geek, you probably know that Kate Bush is performing live for the first time in 35 years!  Her residency at London's Eventim Apollo started on August 26th and will finish on October 1st.  Back in March, her 22 shows sold out in 15 minutes, and once her live performances began, she racked up 8 albums in the Official Albums Chart at the same time - the first woman to do so, and just behind the achievements of Elvis Presley (12 simultaneous top 40 entries) and The Beatles (11).

Kate burst onto the scene in the late 1970s at age 19 with her single "Wuthering Heights", the first woman to have a UK number one with a self-written song. (Pink Floyd's David Gilmour heard Kate's early demo and was instrumental in getting her signed to EMI at the tender age of 16!) She released 4 albums in quick succession: The Kick Inside, Lionheart, Never For Ever, and The Dreaming. It was at this time that she built a private studio and was able to spend more time crafting the album many believe to be her masterpiece, Hounds of Love. A compilation disc, The Whole Story, was released in 1986. The albums The Sensual World (the title track is a paean to James Joyce's Ulysses) and The Red Shoes followed at her own pace, and then there was a 12 year gap before her next album, Aerial. In 2011, Kate released 2 albums, Director's Cut (a reworking of some earlier songs) and 50 Words For Snow.

Throughout her career, Kate Bush has been a fascinating and innovative artist. She has roots in the Progressive Rock movement, and many recall her collaboration with "Prog God" Peter Gabriel, "Don't Give Up".  She was an early embracer of the Fairlight CMI synthesiser and often employed musical instruments from many different cultures - and musicians from other cultures too, such as Bulgaria's Trio Bulgarka.  Her songs abound with literary references.

ABC Library has some of Kate's later albums in the library catalog, as well as a documentary film and an eBook about her! Whether you are discovering her charms or revisiting them, we hope you find something to entertain you.

Kate Bush and Hounds of Love by Ron Moy  [eBook]


Besides having a big effect on us (we've been fans since the mid-1980s), many musicians have declared themselves fans and/or cited her as influential on their work. Check out our playlist, with some recommended Kate Bush tunes and listenalikes that you can find in the library catalog, including Tori Amos, Jane Siberry, Bjork, and Goldfrapp.

"Why we love Kate Bush, by the musicians she's influenced" [London Evening Standard]

"My hero: Kate Bush by Jeanette Winterson" [Guardian]
Posted by abcreader at 8:00 AM