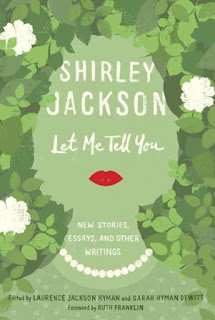 Shirley Jackson, who died 50 years ago this month at the much too early age of 48, left behind a solid literary opus anchored in two indelible works: the iconic short story “The Lottery” and the classy ghost story novel, The Haunting of Hill House (turned into the equally classy movie chiller, The Haunting, starring Julie Harris and Claire Bloom). On the basis of these much-loved works of fiction, we tend to remember Jackson for her dark, if wry, vision, but as a new collection of her previously unpublished and uncollected stories, essays and occasional pieces reminds us, she—and her work—were so much more.
~Robert Weibezahl, "Well Read: Beyond 'The Lottery'", BookPage August 2015

Shirley Jackson (1916-1965) "was viewed in the 'Mad Men' era as a mere female scribbler" - her husband, Stanley Edgar Hyman, brought home the bacon as a New Yorker staff writer while Jackson wrote around household duties, including raising four children. She had "occult tendencies", including an interest in tarot and poltergeists and a collection of grimoires, so it's perhaps no wonder that her fiction tended to depict the "domestic nightmare".

This year saw the release of Shirley Jackson's  Let Me Tell You: New Stories, Essays, and Other Writings. Many of the essays are observations of family life which Jackson contributed to "women's magazines"; the stories generally explore the creepiness of everyday life; Library Journal* praises it:

Remember the chilling excitement of reading Jackson's "The Lottery" for the first time? You'll have that same experience over and over again with this new collection, which offers more than 50 unpublished and uncollected works drawn from Jackson's papers at the Library of Congress and coedited by two of her children.


Not every piece equals the artistry of "The Lottery," the controversial 1948 story that became an anthology and textbook staple, nor do all the pieces prove as haunting as The Haunting of Hill House. Yet together they are a multifaceted portrait of the artist as wife, mother, commentator on the comfortable middle class, and pioneer who explored a world of inexplicable, occasionally frightening phenomena. Writing about her kitchen, she describes its feuding forks, preening glasses, and sarcastic eggbeater. Jackson suggests (rather than delves into) that which is unnerving, writing in a smart, sharp, clear voice.


And what better time to revisit the writings of the woman who was "an inspiration to writers from Stephen King to Joyce Carol Oates, [and] dared to look on the dark side and imagine the unimaginable"* than Halloween? Probably you've heard of The Lottery and Other Stories and The Haunting of Hill House (and perhaps you've seen one of the movies based on the latter, The Haunting [1999] and/or [1963]), but though Jackson's life was short, there are many other works to consider, many (but not all) of them spooky and unsettling. Here's a list of Shirley Jackson items in the library catalog:

The Sundial
Before there was Hill House, there was the Halloran mansion of Jackson's stunningly creepy fourth novel, The Sundial. When the Halloran clan gathers at the family home for a funeral, no one is surprised when the somewhat peculiar Aunt Fanny wanders off into the secret garden. But then she returns to report an astonishing vision of an apocalypse from which only the Hallorans and their hangers-on will be spared, and the family finds itself engulfed in growing madness, fear, and violence as they prepare for a terrible new world.*

Hangsaman
Seventeen-year-old Natalie Waite longs to escape home for college. Her father is a domineering and egotistical writer who keeps a tight rein on Natalie and her long-suffering mother. When Natalie finally does get away, however, college life doesn't bring the happiness she expected. Little by little, Natalie is no longer certain of anything--even where reality ends and her dark imaginings begin. Chilling and suspenseful, Hangsaman is loosely based on the real-life disappearance of a Bennington College sophomore in 1946.*

Just An Ordinary Day
A collection of new and previously unpublished stories.*

Life Among the Savages
In her celebrated fiction, Shirley Jackson explored the darkness lurking beneath the surface of small-town America. But in Life Among the Savages, she takes on the lighter side of small-town life. In this witty and warm memoir of her family’s life in rural Vermont, she delightfully exposes a domestic side in cheerful contrast to her quietly terrifying fiction. With a novelist’s gift for character, an unfailing maternal instinct, and her signature humor, Jackson turns everyday family experiences into brilliant adventures.**

The Bird's Nest
Elizabeth is a demure twenty-three-year-old wiling her life away at a dull museum job, living with her neurotic aunt, and subsisting off her dead mother’s inheritance. When Elizabeth begins to suffer terrible migraines and backaches, her aunt takes her to the doctor, then to a psychiatrist. But slowly, and with Jackson’s characteristic chill, we learn that Elizabeth is not just one girl—but four separate, self-destructive personalities. The Bird’s Nest, Jackson’s third novel, develops hallmarks of the horror master’s most unsettling work: tormented heroines, riveting familial mysteries, and a disquieting vision inside the human mind.**

Come Along With Me: Part of a Novel, Sixteen Stories and Three Lectures
This eclectic collection goes beyond her horror writing, revealing the full spectrum of her literary genius. In addition to Come Along with Me, Jackson's unfinished novel about the quirky inner life of a lonely widow, it features sixteen short stories and three lectures she delivered during her last years.**

9 Magic Wishes (J)
A child meets a magician who grants eight wonderfully fantastic wishes, with one wish left over.


Also consider Private Demons: The Life of Shirley Jackson, a biography by Judy Oppenheimer, and Shirley by Susan Scarf Merrell, a psychological thriller in which fictional young couple spends a year at Bennington in 1964 with novelist Shirley Jackson and her husband.