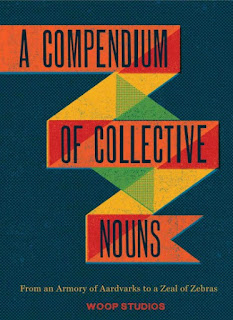 We all talk about "a bunch of bananas" and "a hill of beans", but did you know the collective noun for eagles is "a convocation"?  Hearing talk of "a pride of lions" is not uncommon, but how about "a ostentation of peacocks" or "a punnet of strawberries"?

What we call "collective nouns" here are also known as "terms of venery", and have been collected since the fifteenth century - at first in treatises on hunting. There are some classic collective nouns - has anyone not heard of "a murder of crows"? - but before they ended up in dictionaries, many were created for jest and and with poetic license as much as for utility. There are several books in the catalog that provide an entertaining perusal of well-known and not-so-well-known classic nouns for adults and children. We particularly enjoy the beautiful volumes by Woop Studios!  London-based Woop Studios is Miraphora Mina, Eduardo Lima, Harriet Logan, and Mark Faulkner. Mira and Eduardo spent the last decade working as graphic designers on the Harry Potter movies. The collective is "united by a love of graphic design, words, and images" [back cover].

A Compendium of Collective Nouns: From An Armory of Aardvarks To a Zeal of Zebras by Mark Faulkner, Eduardo Lima Filho, Harriet Logan, and Miraphora Mina of Woop Studios

A Conspiracy of Ravens: A Compendium of Collective Nouns For Birds illustrated by Thomas Bewick

An Exaltation of Larks: The Ultimate Edition by James Lipton

An Ambush of Tigers: A Wild Gathering of Collective Nouns by Betsy R. Rosenthal


A Filth of Starlings: A Compilation of Bird and Aquatic Animal Group Names by Patrick George

Two's Company-- by Shirley Greenway
A Zeal of Zebras: An Alphabet of Collective Nouns by Woop Studios [eBook]
What do you call a group of librarians? A catalog of librarians?  A shush? A stack?

Posted by abcreader at 7:00 AM