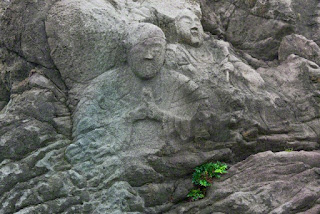 I just got back from a three day silent retreat at a monastery. I was tempted after breaking the silence on the final day, to state my willingness to cook, clean, and work in their library in exchange for room and board. Then I remembered that the cat sitter needed to be relieved of duty and it was time to go home and resume my responsibilities. Eventually, I would also want to find out what was going on with my favorite TV show and catch up with my ungodly celebrity gossip. However, I am committed to finding a way to bring silence and depth into my daily life and the following books may tide me over until the next retreat, even though waking up at 5:30 a.m. has already slipped away.

An Infinity of Little Hours: Five Young Men and Their Trial of Faith in the Western World's Most Austere Monastic Order by Nancy Klein Maguire

Alone In Community: Journeys Into Monastic Life Around the World by William Classen

A History of Celibacy: From Athena to Elizabeth I, Leonardo da Vinci, Florence Nightingale, Ghandi and Cher by Elizabeth Abbott

Silence: The Power of Quiet In a World Full of Noise by Thich Nĥát Hanh

In Silence: Why We Pray by Donald Spoto

And Then There Were Nuns: Adventures In a Cloistered Life by Jane Christmas

Unveiled: The Hidden Lives of Nuns by Cheryl L. Reed

Business Secrets of the Trappist Monks: One CEO's Quest For Meaning and Authenticity by August Turak

The Monks and Me: How 40 Days At Thich Nĥát Hanh's French Monastery Guided Me Home by Mary Paterson

"10% Happier" by Dan Harris is another good book on meditation.