Behind the Scenes of Children's Literature 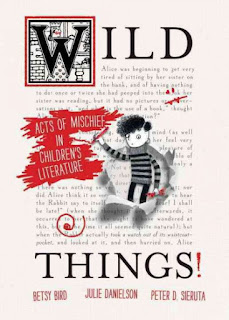 The first children's picture book is said to have appeared in 1658 - Orbis Sensualium Pictus, or The World of Things Obvious to the Senses Drawn in Pictures. Children's books were pretty utilitarian for a long time after that, consisting primarily of hornbooks, alphabet books, and school primers to learn their letters from, and of course the Bible.  But by John Locke's time, he was already recommending "in his Thoughts on Education (1691)...that when a child begins to read, some easy, pleasant book, like AEsop's Fables or Reynard the Fox, with pictures if possible, should be put into his hands," and by the 18th century, publishing was flourishing and an interest in children's literature was on the rise.  Children's literature has only gone from strength to strength since - from early moral, fairy, and adventure tales to an exponential rise in "relatively inexpensive high-quality illustrated books" published during the twentieth century to today.

Maybe you never thought you wanted to know some of the backstories of children's literature, but trust us, you do! Why do children read what they read? Are there books children should be reading? How has children's literature changed over time? What are the stories behind the classics of the genre? The books listed below attempt to answer these questions, and more.

Did Laura Ingalls cross paths with a band of mass murderers? Why was a Garth Williams bunny tale dubbed "integrationist propaganda"? For adults who are curious about children's books and their creators, here are the little-known stories behind the stories. A treasure trove of information for a student, librarian, new parent, or anyone wondering about the post-Harry Potter book biz, Wild Things! draws on the combined knowledge and research of three respected and popular librarian-bloggers. Told in affectionate and lively prose, with numerous never-before-collected anecdotes, this book chronicles some of the feuds and fights, errors and secret messages found in children's books and brings contemporary illumination to the warm-and-fuzzy bunny world we think we know. Secret lives, scandalous turns, and some very funny surprises -- these essays by leading kids' lit bloggers take us behind the scenes of many much-loved children's books.

Children's Literature: A Reader's History, from Aesop to Harry Potter by Seth Lerer

Children's Literature charts the makings of the Western literary imagination from Aesop's Fables to Mother Goose, from Alice's Adventures in Wonderland to Peter Pan, from Where the Wild Things Are to Harry Potter. Seth Lerer here explores the iconic books, ancient and contemporary alike, that have forged a lifelong love of literature in young readers during their formative years. Along the way, Lerer also looks at the changing environments of family life and human growth, schooling and scholarship, and publishing and politics in which children found themselves changed by the books they read. This ambitious work appraises a broad trajectory of influences--including Shakespeare's plays, John Locke's theories of education, Darwin's On the Origin of Species, and the Puritan tradition--which have each shaped children's literature through the ages as well.

Because children are young for such a short time, we need to give them their literary heritage during these brief years. Just as every literate adult knows certain books, every child should know specific children's books. If we fail to present these books to children, they reach adulthood without a basic literary heritage. [from the introduction]


Minders of Make-Believe: Idealists, Entrepreneurs, and the Shaping of American Children's Literature by Leonard S. Marcus

An animated first-time history of the visionaries--editors, authors, librarians, booksellers, and others--whose passion for books has transformed American childhood and American culture. What should children read? As the preeminent children’s literature authority, Leonard S. Marcus shows incisively [that] that’s the three-hundred-year-old question that sparked the creation of a rambunctious children’s book publishing scene in Colonial times. And it’s the urgent issue that went on to fuel the transformation of twentieth-century children’s book publishing from a genteel backwater to big business. [from Amazon]


Artist to Artist: 23 Major Illustrators Talk to Children About Their Art

Unique anthology of twenty three artists have shared the story of their work, their art and their lives as creative people and were among the first to exhibit their work at the Eric Carle Museum of Picture Book Art.


*descriptions can be found in the library catalog unless otherwise noted