We've been thinking a lot about maritime life in the past few years, dating back to when Paul the Octopus was predicting World Cup winners in 2010. More recently, we have been reading about attempts to save Australia's Great Barrier Reef, which is in poor condition due to pollutant damage, the continuing infiltration of plastic into the world's oceans, New Zealand's commitment in ocean conservatation in its creation of an ocean sanctuary in "an area twice the size of [its] land mass and 50 times the size of [its] largest national park", and the presumed demise of world-record-holding freediver Natalia Molchanova.

But generally, we wonder, what is the world of the depths like?We've come up with a list of titles that we hope evoke the sea in all its beauty and mystery. 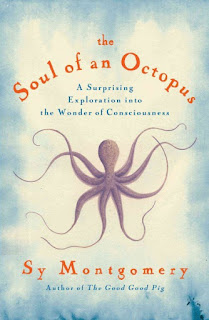 The Soul of an Octopus: A Surprising Exploration into the Wonder of Consciousness by Sy Montgomery

"In this astonishing book from the author of the bestselling memoir The Good Good Pig, Sy Montgomery explores the emotional and physical world of the octopus--a surprisingly complex, intelligent, and spirited creature--and the remarkable connections it makes with humans. Sy Montgomery's popular 2011 Orion magazine piece, "Deep Intellect," about her friendship with a sensitive, sweet-natured octopus named Athena and the grief she felt at her death, went viral, indicating the widespread fascination with these mysterious, almost alien-like creatures. Since then Sy has practiced true immersion journalism, from New England aquarium tanks to the reefs of French Polynesia and the Gulf of Mexico, pursuing these wild, solitary shape-shifters. Octopuses have varied personalities and intelligence they show in myriad ways: endless trickery to escape enclosures and get food; jetting water playfully to bounce objects like balls; and evading caretakers by using a scoop net as a trampoline and running around the floor on eight arms. But with a beak like a parrot, venom like a snake, and a tongue covered with teeth, how can such a being know anything? And what sort of thoughts could it think? The intelligence of dogs, birds, and chimpanzees was only recently accepted by scientists, who now are establishing the intelligence of the octopus, watching them solve problems and deciphering the meaning of their color-changing camouflage techniques. Montgomery chronicles this growing appreciation of the octopus, but also tells a love story. By turns funny, entertaining, touching, and profound, The Soul of an Octopus reveals what octopuses can teach us about consciousness and the meeting of two very different minds." -- Publisher's description. 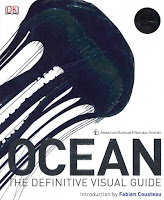 "This dramatic, thought-provoking, and all-encompassing visual guide reveals the power and majesty of the seas and oceans, which cover more than two-thirds of the earth's surface. Navigate the mysteries and marvels of the deep, using a combination of breathtaking photography and expertly researched text."--book jacket.

The Reef: A Passionate History by Iain McCalman

"A journey into the wonders of the Great Barrier Reef, as experienced by explorers, scientists, and artists The Great Barrier Reef is the most spectacular marine environment on earth, a true wonder of the world. Yet the history of our encounters with it has long been elusive. In The Reef, the acclaimed historian and explorer Iain McCalman recounts in full the dramatic story of the reef and the people who have been captivated by it for two centuries. The Reef is a narrative told through the lives of twenty intrepid souls, from Captain James Cook and his voyage across a mysterious coral maze to the world's leading reef scientist, John 'Charlie' Veron, whose personal mission is to rescue the reef from catastrophe. The extraordinary individuals in the book--not only explorers and scientists but also beachcombers, photographers, divers, and indigenous peoples and the castaways they adopted--were drawn to the reef for different reasons, but all shared one thing: a passion for this vast coral country. As McCalman explores how the reef has been seen variously as a labyrinth of terror, a nurturing heartland, a scientific challenge, and a fragile global wonder, he argues that it is only by combining science and art that we will truly appreciate how this great gift of nature has shaped us and why it demands our attention. A classic work of romantic history, blending cutting-edge science with personal reflection and gorgeous images, The Reef is a beautiful book that will speak to broad audiences for years to come"-- Provided by publisher.

The Extreme Life of the Sea by Stephen R. Palumbi and Anthony R. Palumbi

"The Extreme Life of the Sea exposes the eternal darkness of the deepest undersea trenches to show how marine life thrives against the odds, describing how flying fish strain to escape their predators, how predatory deep-sea fish use red searchlights only they can see to find and attack food, and how, at the end of her life, a mother octopus dedicates herself to raising her batch of young. This wide-ranging and highly accessible book also shows how ocean adaptations can inspire innovative commercial products--such as fan blades modeled on the flippers of humpback whales--and how future extremes created by human changes to the oceans might push some of these amazing species over the edge."

Deep: Freediving, Renegade Science, and What the Ocean Tells Us About Ourselves by James Nestor
"While on assignment in Greece, journalist James Nestor witnessed something that confounded him: a man diving 300 feet below the ocean's surface on a single breath of air and returning four minutes later, unharmed and smiling. This man was a freediver, and his amphibious abilities inspired Nestor to seek out the secrets of this little-known discipline. In Deep, Nestor embeds with a gang of extreme athletes and renegade researchers who are transforming not only our knowledge of the planet and its creatures, but also our understanding of the human body and mind. Along the way, he takes us from the surface to the Atlantic's greatest depths, some 28,000 feet below sea level. He finds whales that communicate with other whales hundreds of miles away, sharks that swim in unerringly straight lines through pitch-black waters, and seals who dive to depths below 2,400 feet for up to eighty minutes--deeper and longer than scientists ever thought possible. As strange as these phenomena are, they are reflections of our own species' remarkable, and often hidden, potential--including echolocation, directional sense, and the profound physiological changes we undergo when underwater. Most illuminating of all, Nestor unlocks his own freediving skills as he communes with the pioneers who are expanding our definition of what is possible in the natural world, and in ourselves"-- Provided by publisher.

In The Cultural Lives of Whales and Dolphins, cetacean biologists Hal Whitehead, who has spent much of his life on the ocean trying to understand whales, and Luke Rendell, whose research focuses on the evolution of social learning, open an astounding porthole onto the fascinating culture beneath the waves. As Whitehead and Rendell show, cetacean culture and its transmission are shaped by a blend of adaptations, innate sociality, and the unique environment in which whales and dolphins live: a watery world in which a hundred-and-fifty-ton blue whale can move with utter grace, and where the vertical expanse is as vital, and almost as vast, as the horizontal. Drawing on their own research as well as a scientific literature as immense as the sea—including evolutionary biology, animal behavior, ecology, anthropology, psychology, and neuroscience—Whitehead and Rendell dive into realms both humbling and enlightening as they seek to define what cetacean culture is, why it exists, and what it means for the future of whales and dolphins. And, ultimately, what it means for our future, as well.* 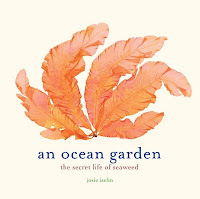 An Ocean Garden: The Secret Life of Seaweed by Josie Iselin

In her captivating new book, artist and avid beachcomber Josie Iselin returns to the seashore to reveal the unexpected beauty of seaweed. Produced on a flatbed scanner, Iselin’s vibrant portraits of ocean flora reveal the exquisite color and extraordinary forms of more than 200 specimens gathered from tidal pools along the California and Maine coasts. Her engaging text, which accompanies the images, blends personal observation and philosophical musings with scientific fact. Like her previous books, An Ocean Garden: The Secret Life of Seaweed is a poetic and compelling tribute to the natural world and the wonder it evokes.*