Does anybody else have the problem of checking out too many books at once - so that so many accumulate that you get overwhelmed and end up returning several that you've barely begun reading? I had to do that this weekend.  About 5 books that I decided I would probably never finish at this rate came back to the library.  I have to tell myself that if they're important enough, I'll remember them later. I don't even make a list of them, because that would just add to my overwhelm. Which is not really consistent with the fact that I have a running list of possibly hundreds of "to read" books.  I use it so that I can completely ignore all of the books I want to read.  I tell myself that if it's important enough, I'll have an urge to read it whether it's on the list or not, and that this list is just to refer back to in the event that I run out of things to read.  Like THAT will ever happen!  I'm a book addict working in a library.  But at least I borrow instead of buy - my house would be made of books and I would be completely broke if I did that.

I know I have librarian problems,* but I'm also aware that my threshold is very low.  Because I know that I get overwhelmed when too many items are on my account, I try really hard to say no to most of the books I drool over as they pass under my nose at work.  (Thus, the "to read" list, which I'm realizing also makes me feel like someday I might read all of the books I've ever wanted to read... more wishful thinking.)  As I said earlier, I returned about 5 books, but all I had checked out were 11 in total at that point - which is relatively few in light of the 50 item limit that full privilege cardholders have.  But I don't have time to read 11 books at once!  And if I focus on just one, it will take me a month to finish it unless I become totally antisocial or stop doing the dishes.  (I may not read very much.)

So there's a taste of the struggles and joys we who work at the library (and/or love books too much) face day to day.  If you would like some books about working in a library atmosphere to take home or add to your "to read" list, I've listed some below for your browsing pleasure.  (Don't take them too seriously!) 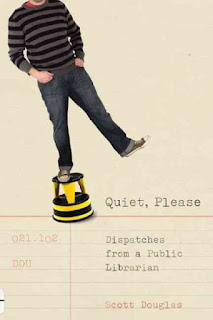 Quiet, Please: Dispatches from a Public Librarian by Scott Douglas

Librarian for a Day  by Julie Tibbott

At the completion of the writing of this post, I have already accumulated 6 more books that I will not have time to read.  But maybe I'll give myself a pass this once since I will be on vacation for a week very soon.  I would be making up some excuse to take them home even if I weren't, though - let's be real.

*To honor my colleagues who are actual librarians, I will admit here that I'm only a paralibrarian - I did not work my behind off in school to achieve librarianhood.  When customers call me a librarian, I have to explain that I am not, in fact, that formally educated.
Posted by Hannah at 8:00 AM

Don't forget this one!

I just turned in half a dozen books I didn't even open and there are two serious documentaries, just waiting for me to get off of Facebook and watch them.