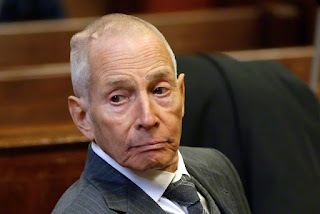 The Jinx: The Life and Deaths of Robert Durst is now on DVD, and you can place your hold on this chilling documentary. The Jinx raises many questions about justice, evidence, and the legal options for an ultra wealthy real estate icon. Durst is suspected in the disappearance of his wife Kathleen Durst, the murder of his friend Susan Berman,, and he was also tried and acquitted in the death and dismemberment of his neighbor Morris Black. Why isn't he behind bars? The Jinx will answer these questions and show you what the best possible defense can buy, right up until the point the client brings it all crashing down.

For a visit to the other side of the tracks, check out Amy Berg's documentary West of Memphis. Berg's documentary chronicles the harrowing journey of the West Memphis Three, the title for three Arkansas teenagers: Damien Echols, Jason Baldwin, and Jessie Miskelly Jr., who were wrongfully convicted in the homicide of three eight-year-old boys. Michael Moore, Steven Branch, and Christopher Byers were found in Robin Hood Hills in horrifying circumstances. Their deaths triggered a traumatic reaction from a town steeped in religion. The "Satanic panic" gripping the time this crime occurred in overrode the investigation and three more boys paid the price of hysteria and prejudice. West of Memphis reveals what the defense had to go through in order to get Echols off of death row after eighteen years of solitary confinement and the confounding compromises of an Alford plea for all three convicted men.

Werner Herzog's pensive documentary Into the Abyss: A Tale of Death, A Tale of Life, takes viewers into the heart of the death penalty and considers the perspectives of the condemned, victims, executioners, and a sensitive pastor who attended countless executions, ministering right up to the end. Herzog makes his position on this issue clear, but his gifts as a director make it possible for opponents to state their experiences and opinions candidly.

Errol Morris has directed and produced many outstanding documentaries, but The Thin Blue Line still stands out as an enthralling documentary about wrongful convictions and how important it is for citizens to invoke their Miranda rights when questioned by the police. Morris's re-enactment of crucial events and an eerie accompanying soundtrack by Philip Glass draws viewers in to the sinkhole of being an innocent man whose life is stolen. The Thin Blue Line is a masterpiece of journalism and tenacity from a director who brought new possibilities for justice through documentary films.

Dear Zachary: A Letter To His Son About His Father by Kurt Kuenne is a wrenching journey through the Canadian legal system, as experienced by David and Kate Bagby. The Bagby's only son Andrew, a beloved young doctor was murdered by a disturbed woman named Shirley Turner, who gave birth to their grandson Zachary. The film focuses on the Bagby's fight to win custody of Zachary, while enduring a convoluted extradition process between Canada and the United States, so that Shirley could stand trial for murdering Andrew. Kuenne travels through America and England, interviewing Andrew's friends and relatives, in order to present Zachary with memories of the father he would never meet. Ultimately, Dear Zachary becomes a different testimonial about the nature of good and evil, and the inexcusable failures of a justice system that disregards victims' rights.

For more mind blowing documentaries, check out the following DVDs:

Plunder: The Crime of Our Time

Deliver Us From Evil