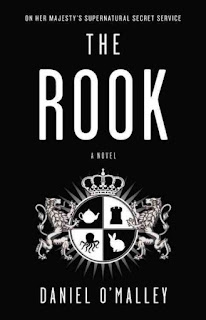 Checquy statistics indicate that 15 percent of all men in hats are concealing horns.
~Daniel O'Malley, The Rook

It opens with a letter, and the letter begins: "Dear You, The body you are wearing used to be mine." Myfanwy Thomas finds the letter in her pocket when she wakes up, bruised and beaten and with dead bodies wearing latex gloves all around her, in a London park. Of course, she doesn't know that she is called, or rather, that the body she inhabiting is called, Myfanwy Thomas until she reads the letter (which tells her pronounce her first name to rhyme with Tiffany, rather than the traditional Welsh pronunciation). Her memory has been wiped clean; she is beginning from scratch. The letter was in her pocket, addressed "To You"; there is another, marked "2", that continues telling her the story of Myfanwy.

The novel is not epistolary, but letters from her former self (and a large purple binder) play a big part in telling her story. The adventure begins with a bank lockbox and a choice, and Myfanwy chooses to rejoin her body's former life as a Rook, a high-level operative in the Checquy (pronounced Sheck-Eh) Group - which is, as the book cover describes it, "Her Majesty's Supernatural Secret Service". For centuries they have protected the world from sentient fungus, the Sirens of the Mediterranean Sea, fleshcrafters (those who radically alter the properties of the human body), and the like. The purple binder is full of information about the Checquy, and about her work there. Myfanwy is literally learning her job, and how to wrangle with her own supernatural ability, as she goes along.

And what a job! Myfanwy has a large office, a secretary, an executive assistant named Ingrid, and an established reputation for being an extremely capable, but timid, administrator waiting for her. A day's work includes a woman who coughs up ectoplasm that turns into the animals that chase people; dreams of Victorian ladies who offer her afternoon tea and interrogate her; a co-worker who is four bodies with a hive mind; a secret training facility that turns children into fighters; and the knowledge that there is a traitorous conspiracy to unravel before Myfanwy's memory is taken again...or worse. This is all part of the wild ride that is The Rook.

Intrigued? Read the first 4 chapters of The Rook, watch a book trailer, and more at The Rook Files, the website of author Daniel O'Malley. A sequel to The Rook, Stilleto, will be published in June 2016. And watch for The Rook to premiere on Hulu as a television show! We can hardly wait!