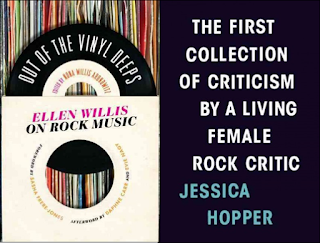 ...men writing songs about women is practically the definition of rock 'n' roll. And as a woman, as a music critic, as someone who lives and dies for music, there is a rift within, a struggle of how much deference you can afford, and how much you are willing to ignore what happens in these songs simply because you like the music.
~Jessica Hopper, "Emo: Where the Girls Aren't"

We've always had an interest in music. As teenagers, we read Rolling Stone and Spin; we've checked out Mojo's playlists and NME's Albums of the Year; we pay for Spotify, stream Pandora (and Freegal, with our valid library card), read reviews on Pitchfork, watch Tiny Desk Concerts on NPR. We still want the albums so we can read the liner notes. We remember when MTV played videos. And, while now that we're older and probably never going to make it to Coachella or Glastonbury (though we've watched movies about both, and we've been to SXSW twice), we'd still consider staying up late on a "school night" if there's a good show in town, and driving to Denver to to catch Florence & the Machine this May is a distinct possibility.

We've been thinking about this a lot, since we recently read two books by female rock critics Ellen Willis and Jessica Hopper. Ellen Willis was, notably, the first popular music critic for The New Yorker, between 1968 and 1975, though she wore many other hats; until last year, Jessica Hopper was a senior editor for the Pitchfork website and editor in chief of the print quarterly The Pitchfork Review.


When the chasm of human experience feels unbridgeable, and the past is keeping you like the stocks, and there is no absolution to be had, no forgiveness to salve you, and the world feels too much in its infinite newness and it's midnight and people are screaming and feeding babies ranch-flavor chicken fingers from a bucket, when all you see is difference and a long string of your own unqualified failures, there is Van singing, "Lay me down...to be born again." There is so much  wanting in "Astral Weeks." but it's not desperation, it's all vessel; it's faith enough to cover us all.


Whether Jessica Hopper is talking about Van Morrison, Lana del Rey, Bruce Springsteen, Superchunk, or Kendrick Lamar, you will want to listen to their music to feel the emotions her writing evokes; trips to Coachella, L.A.'s all-ages venue The Smell, and Michael Jackson's hometown after his death will move and entertain you; "How Selling Out Saved Indie Rock" showed us how the music industry works today.  The pieces in Hopper's First Collection range from "Emo: Where the Girls Aren't" for Punk Planet in 2003 to "You Will Ache Like I Ache: The Oral History of Hole's Live Through This" for Spin in April 2014, and are split into sections such as "Real/Fake", "Nostalgia", and "Bad Reviews". At 201 pages, it's a slender tome, and one we highly recommend.


Out of the Vinyl Deeps: Ellen Willis on Rock Music

Ellen Willis' book was a bit of a harder sell for us, probably because (the horror!) we are not fans of Bob Dylan or the Rolling Stones, and both these artists get extensive coverage by Willis. Her book, just a bit longer than Hopper's, is separated into sections such as "The Adoring Fan", "The Navigator", and "The Sixties Child", gathered by content rather than chronology. Most are short pieces, although the collection includes the 20-page essay on Bob Dylan that got Willis noticed by the New Yorker in the first place. Willis' Rock, Etc. columns for that magazine make up the bulk of the collection.

Willis' voice is serious and scholarly for the most part; there is a review of Dylan's Love and Theft that describes the tensions in his music as "never...about electric versus acoustic but about personal and idiosyncratic versus collective and generic; topical and profane versus primordial and sacred; transcendence as excess versus transcendence as purgation..." Yet, in "The Decade in Rock Lyrics", she wittily uses lyrics from some of the decade's most popular tunes to sum up its history on topics like celebrities, style, the Battle of the Sexes, and economics; and the pictures of Willis in the book include one of her in typical music nerd posture, in front of a large vinyl collection, plugged into giant headphones and taking notes on her latest record, and one of her wearing a T-shirt that says "Anarchy in Queens". Interestingly, having just recently read a lot of adulation of David Bowie in the press since his death, Out of the Vinyl Deeps contains an essay about "Bowie's Limitations", written in 1972. There are also essays about Janis Joplin, Creedence Clearwater Revival, Grand Funk Railroad, and others.

The library catalog features more of Willis' essays in The Essential Ellen Willis, which is a broader collection of her writings. These essays are "...both deeply engaged with the times in which they were first published and yet remain fresh and relevant amid today's seemingly intractable political and cultural battles". There are a few pieces on Bob Dylan and Janis Joplin, but far more about politics and women's rights. Like Out of the Vinyl Deeps, this collection was edited posthumously by Willis' daughter, Nona Willis Aronowitz.


We hope these books will pique your interest in reading music journalism by female writers, or perhaps to start writing your own. In focusing on female critics, we are trying to do for their work what Kathleen Hanna of Bikini Kill did for female audience members too put off by all the all-male mosh pit to approach the stage when she would tell the crowd,“All girls to the front! I’m not kidding. All girls to the front. All the boys be cool, for once in your lives. Go back! Back! Back!” [quoted in the film The Punk Singer]

If you would like to read more music journalism by women, try: Rip It Up: The Black Experience in Rock'n'Roll edited by Kandia Crazy Horse; Girls to the Front: The True Story of the Riot Grrrl Revolution by Sara Marcus; Record Collecting For Girls: Unleashing Your Inner Music Nerd, One Album at a Time by Courtney E. Smith; Heavy Metal: A Cultural Sociology by Deena Weinstein; A Man Called Destruction: The Life and Music of Alex Chilton, From Box Tops to Big Star to Backdoor Man by Holly George-Warren; and Madonna: Like An Icon by Lucy O'Brien.

The Good Listener: How Do You Break Into Music Journalism? [NPR]