Blunt, Sarcastic, Inappropriate: A Reading List Suggested by the Works of Carrie Fisher 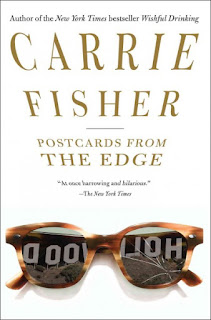 There were too many painful losses to count in 2016, and the death of Carrie Fisher was among the most painful for me. I’ve never seen any of the Star Wars movies–-I never got around to it as a kid and now it’s just fun to watch people’s horrified reactions when I tell them I’ve never seen the iconic films. I read her memoir, Wishful Drinking, the year I got sober. I related to Fisher on many levels–-as a recovering alcoholic, as a person who has learned not to be ashamed of her depression, as someone who is really and truly obsessed with her dog, and as a woman who has always found humor in the blunt, the sarcastic, and the inappropriate. So inspired not just by Wishful Drinking but her entire life, here are 10 non-fiction books I think the Great Carrie Fisher, Our Misfit Queen, would appreciate.
~Katie MacBride, "A Non-Fiction Reading List In Honor of Carrie Fisher"


To many, Carrie Fisher was first and foremost an actress and Hollywood royalty. To others, like us, Carrie Fisher might have first come to our attention as Princess Leia, but we'd come to think of her as an engaging writer with a dry wit who'd penned some scathing social commentary based on her own life experiences. You can find most of her books, fiction and non-fiction, in the library catalog. She was also  a screenwriter and script doctor. But she always had a distinctive point of view.

In everything she wrote, she was a character. Our eResource NoveList describes Carrie Fisher thusly:


In both fiction and memoir, Carrie Fisher captivates readers with candid, insightful, funny revelations about the difficulties of celebrity life. Her humor ranges from amusing to darkly humorous as she relates characters' (and her own) struggles with relationships, addictions, and mental health. Even in the worst situations there is bittersweet emotion, a sense of thrill in survival by being not quite sane. Fisher's personal voice is witty, as is that of her heroines who are often sarcastic or sassy. Though drawn from her real life, scenes often resemble high-drama.

When she was cruelly taken from us too soon in December, we lost a voice that was "funny and sharp and witty even as she was laying her soul wide open," a generous soul who was also "a fervent activist who spoke openly about her own struggles with mental health and addiction." Inspired by the Katie MacBride reading list quoted above, we've tried to find other writings that echo some part of her voice, the wry humor in the face of adversity, the warts-and-all acceptance of family, negotiating celebrity, a willingness to share her highs and especially her lows with the world, the unflinching courage to speak truth to power (as Tavis Smiley explains it, "comforting the afflicted, and afflicting the comfortable"). Can you think of other titles? Let us know in the comments!

I'm Judging You: The Do-Better Manual by Luvvie Ajayi [eAudio]

Hyperbole and a Half: Unfortunate Situations, Flawed Coping Mechanisms, Mayhem, and Other Things That Happened by Allie Brosh

Lit: A Memoir by Mary Karr

The Merry Recluse: A Life in Essays by Caroline Knapp

I'm Supposed To Protect You From All This: A Memoir by Nadja Spiegelman

Haldol and Hyacinths: A Bipolar Life by Melody Moezzi

The Bedwetter: Stories of Courage, Redemption, and Pee by Sarah Silverman [eAudio]

Listen to the Squawking Chicken: When Mother Knows Best, What's a Daughter To Do?- A Memoir (Sort Of) by Elaine Lui

You'll Grow Out of It by Jessi Klein

Bitch: In Praise of Difficult Women by Elizabeth Wurtzel

The Rules of the Tunnel: A Brief Period of Madness by Ned Zeman

The Chronology of Water: A Memoir by Lidia Yuknavitch

Blackout: Remembering the Things I Drank to Forget by Sarah Hepola

But Enough About Me: A Jersey Girl's Unlikely Adventures Among the Absurdly Famous by Jancee Dunn

Trainwreck: The Women We Love to Hate, Mock, and Fear ... and Why by Sady Doyle

How To Be a Woman by Caitlin Moran
Notes From the Underwire: Adventures From My Awkward and Lovely Life by Quinn Cummings


Fisher herself, meanwhile, would like it to be reported that she was drowned in moonlight, strangled by her own bra. The joint public memorial for Carrie and her mother, Debbie Reynolds, will be in Los Angeles on March 25th.

Thank you, that was a beautiful tribute.