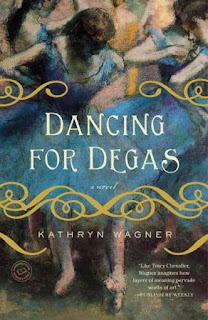 Well, I'm trying to take a different approach. And there's two things I do: When I go into a gallery, first of all, I go quite fast, and I look at everything, and I pinpoint the ones that make me slow down for some reason or other. I don't even know why they make me slow down, but something pulls me like a magnet and then I ignore all the others, and I just go to that painting. So it's the first thing I do is, I do my own curation. I choose a painting. It might just be one painting in 50. And then the second thing I do is I stand in front of that painting, and I tell myself a story about it.  Why a story? Well, I think that we are wired, our DNA tells us to tell stories. We tell stories all the time about everything, and I think we do it because the world is kind of a crazy, chaotic place, and sometimes stories, we're trying to make sense of the world a little bit, trying to bring some order to it. Why not apply that to our looking at paintings?
~Tracy Chevalier, "Finding the story inside the painting"

We're not fiction writers, but seems like sometimes a writer might need a prompt to get a story started in their head, and why shouldn't that be art? Author Sophia Tobin says they are "natural kindling for each other," and we can only concur. Sometimes it's a specific painting, sometimes a specific artist. Tracy Chevalier used works of art as a prompt for her early novels (most notably Vermeer, but also medieval tapestry); Sarah Dunant, Alexandra Lapierre, and Susan Vreeland also caused a stir with their art-inspired fiction, ranging from Louis Tiffany to Renoir to Artemisia Gentileschi. Sometimes it's not just a fictionalized account of art history, but the art or artist is completely fictional, but the creative sensibility of the writing can be no less inspired or impassioned than the real deal. If you are an art lover - even if you just know what you like - why not pick up some novels inspired by art? Maybe you'll even start looking at what's hanging on your own walls differently.


In Sunlight or In Shadow: Stories Inspired By the Paintings of Edward Hopper edited by Lawrence Block
Inspiration: Edward Hopper

Artful by Ali Smith
Inspiration: "Artful began with a series of lectures that Smith gave during her time as a visiting writer at St. Anne’s College. They concern big topics like art, literature, and time, and reference a host of real works, writers, and artists. But these lectures are also embedded within a larger context that gives them a fictional backdrop: the narrator finds herself being visited by the ghost of a lost love. It’s a beautifully jarring touch, bringing together aesthetic discussions with more metaphysical realms, and leaving things in a deeply unpredictable state throughout." [Signature]

My Name Is Red by Orhan Pamuk
Inspiration: "A vivid, multi-voiced story of 16th-century Istanbul centring around the murder of a miniaturist who is working on a secret book for the sultan. But this is no straightforward murder mystery; Pamuk explores death, love and the nature of Islamic art with immediacy and an awareness of its cultural resonance." [Guardian]

Girl Reading by Katie Ward
Inspiration: "This debut novel is comprised of seven sections, each based on a separate woman and her portrait." [Guardian]

Daughter of Time by Josephine Tey
Inspiration: A portrait of Richard III inspires a hospitalized police detective to investigate the mystery of the princes in the Tower.