Movie studios love to remake movies. Whether it's a live action version of a Disney movie or a reboot of a horror film, there are plenty of remakes to choose from. Today, I'm focusing on horror movie remakes. I'm excluding Stephen King movies, which will get their own post later.

Let the Right One In / Let Me In 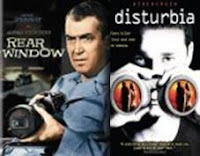 Have you seen any of these movies? If so, which ones did you like best? Let us know in the comments!
Posted by Kelly at 8:00 AM

Of the listed I haven't seen the new poltergeist, the old let me in (I actually didn't realize this was a remake), and the old rear window (I do love Disturbia though).

I think the great thing about horror is there is less of a defined story that must be told in a specific way. So, therefore, remakes are easier. As long as we get the villain right and the vague story line is followed it can still be an enjoyable movie, as horror often has such a low standard to hit.