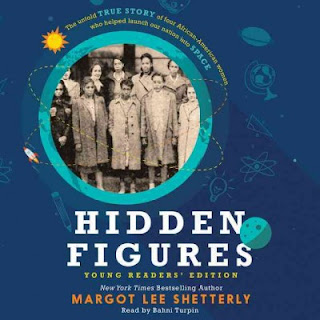 The experience of absorbing audiobooks can be challenging for some modern listeners, Bahni feels. The heavy reliance on television for entertainment has led some to forget how to listen without a visual component. But she doesn't draw a line between acting and narration. Bahni reads each book before recording and makes notes about how each character should sound. "I like to give each one a characterization and really try to read the way I feel the text should be heard. I especially enjoy doing dialects."
~Jenan Jones Benson, "Talking With Bahni Turpin"

Bahni Turpin is an actress, an ensemble member of Cornerstone Theater Company in Los Angeles whose movie roles have included Daughters of the Dust and who has guest starred in several television series including NYPD Blue, Law and Order, Six Feet Under, and Cold Case. The first audiobook she narrated was Cupcake Brown's A Piece of Cake - before she began her narrating career,  she had not been a fan of audiobooks, but now she "loves listening to women's stories as she tools around Los Angeles" and has narrated over 70 audiobooks. Her narration is "known for the depth of her character portrayals and her ability to set a scene, especially her skill at reflecting the tone of all she narrates," and she has received several AudioFile Earphones Awards for her work. Here's a sampling of the audiobooks she has narrated which are available in the library catalog:

The Underground Railroad by Colson Whitehead

The Help by Kathryn Stockett [with others]

Back Channel by Stephen L. Carter

The Twelve Tribes of Hattie by Ayana Mathis [with others]

Unbound: A Novel in Verse by Ann E. Burg [J]


The Sun Is Also a Star by Nicola Yoon [YA]
The Muse by Jessie Burton [with others]
My Spirit Took You In: The Romance That Sparked an Epidemic of Fear by Louise Troh
'Til the Well Runs Dry by Lauren Francis-Sharma [with others]
Pieces and Players by Blue Balliett [J]
Spectacle: The Astonishing Life of Ota Benga by Pamela Newkirk
Untwine by Edwidge Danticat [YA]

an ensemble member of Cornerstone Theater Company in Los Angeles. She has guest starred in many television series including NYPD Blue, Law and Order, Six Feet Under, Cold Case - See more at: http://www.penguinrandomhouseaudio.com/narrator/72264/bahni-turpin/#sthash.mop31Tk7.dpuf
Cornerstone Theater Company in Los Angelesmost known for her roles in Cold Case and Without a Trace. The first audiobook she narrated was Cupcake Brown's A Piece of Cake. She had narrated books for both youth and adults, and is "known for the depth of her character portrayals and her ability to set a scene, especially her skill at reflecting the tone of all she narrates
Posted by abcreader at 7:00 PM