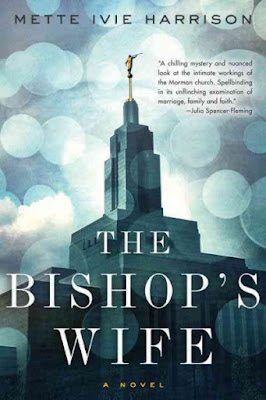 Whenever I hear the word "Mormon" or "Latter Day Saints" I'm transported to my childhood in Idaho Falls, Idaho and the neighborhood I grew up in, across the street from the Cook family. Their father was a kind farmer who generously gave each child an egg during our first grade visit to his farm. The Cook family had eight kids and counting by the time we moved away to Albuquerque in the 1980's. We were the only Catholics I knew of in our neighborhood and the Cook daughters Stephanie, Cammie, and Analiese gave me the first glimpses into their world of no caffeine, clean living, forever families, and the afterlife as interpreted by children. I first heard about sacred garments when we played with my paper dolls who were deemed immodest for having two piece underwear and swimming suits.

Idaho is next door to Utah and predominantly Mormon, or the preferred term LDS (Latter Day Saints). The Idaho Falls Temple is the first image you will see if you google "Idaho Falls". Until we moved away, I had never heard the major swear words and led a very sheltered existence in this insular community. Because we did not belong to the LDS church, we were outsiders and if I had finished growing up in Idaho Falls, that sense of being on the outside looking in would have most likely increased over the years, along with my curiosity.

Latter Day Saints are part of an all-American religion, deeply woven into the fabric of our society. Founded in 1830 by their prophet Joseph Smith, The Church of Jesus Christ of Latter-Day Saints is a Christian restorationist church that members consider to be a restoration of the original church founded by Jesus Christ. The LDS church's headquarters are located in Salt Lake City, Utah and is the fourth largest denomination in the United States of America. During the pioneer era of their church, Latter Day Saints trekked across the United States and settled in Salt Lake City under the theocratic leadership of their second president, Brigham Young. LDS history at times has been controversial, due to the short-lived practice of polygamy, refusal of the priesthood to black men (which was overturned through spiritual revelation in 1978), and staunch gender roles and family values that helped to defeat the Equal Rights Amendment (ERA) in the 1970's. As a younger religion, Mormonism is distinctly unique compared to other Protestant religions, due in part to their missionary program, sacred text The Book of Mormon, and strong, wholesome communities that rely on their members to fulfill the roles that would normally fall under the authority of a paid clergy.

Mette Ivie Harrison is an author of young adult books and made her foray into the adult mystery genre with her ground-breaking book: The Bishop's Wife. Harrison is a Latter Day Saint, along with being an author, a Princeton graduate with a Ph.D in Germanic Languages and Literature, a mother of five, a contributor to The Huffington Post, and an All-American triathlete. Her debut mystery novel The Bishop's Wife is set in Sandy, Utah and the main character Linda Wallheim is married to Kurt Wallheim, a solemn Mormon bishop who serves their local ward (or what Catholics would call their parish) on top of being a full-time accountant.

Linda is the mother of five grown boys and spends her time in a supportive role consisting of comforting and visiting members of her ward in the capacity of a bishop's wife. As a bishop's wife, Linda works closely with their Relief Society, providing casseroles to distraught families in crisis and arranging for their home teachers to offer them spiritual support. Linda is a deep thinker, a dutiful, practicing Mormon, but has her own opinions about the patriarchal nature of her religion. Linda draws readers into the world of every day Mormonism in a way that is respectful and honest, allowing us to see challenging situations through her eyes, which are tempered with critical thinking and wary skepticism.

As a true crime aficionado, I immediately saw that The Bishop's Wife was inspired by the Susan Powell tragedy, a mother of two who disappeared under bizarre circumstances and has never been found. Her husband Joshua Powell was the prime suspect and before the police could make their case against him, Powell committed a murder-suicide, taking the couple's two boys' lives before he killed himself and set their home on fire.

The novel opens on a cold Utah winter morning, when neighbor Jared Helm and his daughter turn up at the Wallheim's home, claiming that Jared's wife Carrie has disappeared. The circumstances are suspicious, especially since Carrie would never abandon her five-year-old daughter. Linda is convinced that Jared murdered his wife and is determined to get justice for Carrie and her daughter, despite Kurt's pleas that she not get involved. The novel does not resort to a predictable narrative and Harrison will keep you transfixed until the shocking moment of truth. 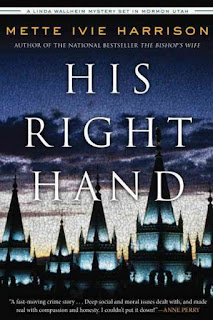 Harrison's second mystery His Right Hand is even more compelling and thought-provoking. Harrison does not whitewash or sidestep contemporary and sensitive issues such as the difficulties of being homosexual in the LDS church, which has developed difficult policies for members and their families, leaving many people having to make hard choices between their religion and authentic identities. At the same time, Mormon feminists like Kate Kelly are making their case for ordination and finding themselves excommunicated instead.

Linda Wallheim finds herself embroiled in another murder in her ward where her husband Kurt is still serving as a Mormon bishop. One night, a distraught member named Emma phones Linda and Kurt to report that Carl a second counselor of the ward is late coming home from a church meeting. Kurt and Linda drive over to the church, where they find Carl strangled with a woman's scarf. The autopsy reveals that Carl was transgender. This revelation surprises everyone, including Emma and their two adopted children. In a church where women are not allowed to hold the priesthood, Carl has been living as a man and performing functions such as providing blessings and temple work. As the church leaders struggle to keep the news of Carl's gender concealed, Linda begins to uncover facts unknown to the police, and she has to choose between supporting her distraught husband or finding Carl's killer. Kurt Wallheim, who is portrayed as a compassionate but very Orthodox Mormon, struggles with this knowledge and the impact it has on his own sense of discernment and masculinity.

A subplot of His Right Hand is the Wallheim's youngest son coming out as a gay man who still wants to serve his church as a missionary. Samuel believes in church doctrine, but by his sexual orientation has an unavoidable conflict with it, if he chooses to not be celibate. We learn about Linda's first failed marriage to a closeted gay man and how their subsequent divorce fractured her relationship with her conservative family and church community and drove her to become an atheist until she finally returned to the church and married Kurt. The tensions between loving and accepting homosexual family members and remaining in religious life are treated with sensitivity and courage. 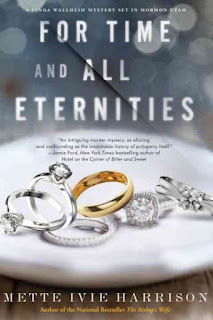 The Mormon church may have renounced polygamy in the 19th century, but for some Fundamentalist Latter-Day Saints, "plural marriage" is still a part of their faith. For Time and All Eternities begins with Linda Wallheim learning that her son Kenneth has gotten engaged to a young woman from a polygamous family. Naomi Carter no longer practices the religion she grew up in, but the Carters will still be the Wallheims' in-laws once Kenneth and Naomi are married. Stephen Carter, Naomi's father and the patriarch of the Carter clan, invites Linda and Kurt Wallheim to the Carter family compound in the remote foothills of the mountains outside Salt Lake City. Stephen Carter wishes to meet his future in-laws, and introduce them to his five wives and twenty-two children. Linda considers polygamy to be an abusive practice that harms women and children and prepares to look for signs that Stephen's wives and children are in need of help. However, when the patriarch is found dead, the question isn't who did it, but who didn't want to kill him? Once again, Linda is determined to find the killer and protect the wives and children left behind while contending with her own spiritual challenges.

American Crucifixion: The Murder of Joseph Smith and the Fate of the Mormon Church by Alex Beam

The God Who Weeps : How Mormonism Makes Sense of Life by Terryl Givens, Fiona Givens

The Book of Mormon a Very Short Introduction  (ebook) by Terryl L. Givens

The Mormonizing of America: How the Mormon Religion Became a Dominant Force in Politics, Entertainment, and Pop Culture by Stephen Mansfield

When Men Become Gods: Mormon Polygamist Warren Jeffs, His Cult of Fear, and the Women Who Fought Back by Stephen Singular

Under the Banner of Heaven: A Story of Violent Faith by Jon Krakauer

Prophet's Prey: My Seven-Year Investigation Into Warren Jeffs and The Fundamentalist Church of Jesus Christ of Latter Day Saints by Sam Brower