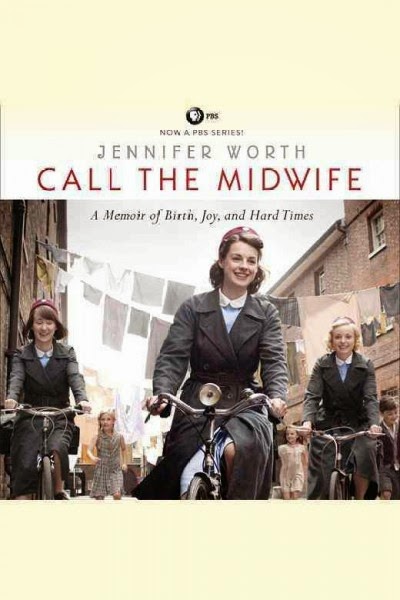 Have you been watching the delightful series Call The Midwife on PBS? Season 3 has recently concluded, and filming for Season 4 has just begun. The series is "based on the best-selling memoirs of the late Jennifer Worth, [and] tells colorful stories of midwifery and families in London’s East End." Nurse Jenny Lee (based on the author) has been the main character and narrator as she navigates life at Nonnatus House, a nursing convent, in the 1950s.  The cast of characters includes the nuns of Nonnatus (Sisters of the Anglican Community of St John the Divine)* and Jenny's fellow nurses, who work alongside the nuns in the community.

We have really been enjoying this series, though it often leaves us in tears! Much of the story has been taken from Worth's memoirs, although "[s]creenwriter and executive producer Heidi Thomas...received Worth's blessing to continue into series three and beyond, even though the memoirs had run out of material by the end of series two."**

Season 4 will premiere Spring 2015...here a few items to keep you entertained until then!


Call the Midwife: A Memoir of Birth, Joy, and Hard Times by Jennifer Worth [also available as eAudiobook]

Call the Midwife: Farewell to the East End by Jennifer Worth (Book 3) [also available as eBook and eAudiobook]

The Life and Times of Call the Midwife: The Official Companion to Season One and Two by Heidi Thomas [eBook]

Call the Midwife DVDs: Season One and Season Two

Pushed: The Painful Truth About Childbirth and Modern Maternity Care by Jennifer Block

Get Me Out: A History of Childbirth From the Garden of Eden to the Sperm Bank by Randi Hutter Epstein

Birth: The Surprising History of How We Are Born by Tina Cassidy

Monique and the Mango Rains: Two Years With a Midwife in Mali by Kris Holloway

Baby Catcher: Chronicles of a Modern Midwife by Peggy Vincent

Birth Matters: A Midwife's Manifesta by Ina May Gaskin

Call The Midwife quiz [The Mirror]

Vanessa Redgrave to star onscreen in Call the Midwife [BBC]**
May contain spoilers!