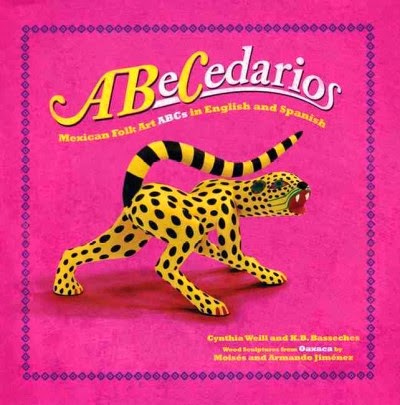 \ ey-bee-see-DAIR-ee-uhn \  , noun;
1. a person who is learning the letters of the alphabet.
2. a beginner in any field of learning.

Alphabet books for beginning readers generally present the letters of the alphabet alongside words beginning with the same letter - think "A is for apple". According to Wikipedia, this tradition dates back to the hornbooks of Shakespeare's day and is considered to be one of the oldest genres in American literature. Alphabet books can be very straightforward - again, "A is for apple" - or have more creative formats, such as poems that use many words that begin with the same letter or stories told alphabetically, such as the Apple Pie ABC. Nowadays, there are even alphabet apps!

Here's a list of some fun ABC items for kids you can find in the ABC Library catalog:

The ABC of Fabulous Princesses by Willy Puchner

123 Versus ABC by Mike Boldt

V is For Vegan: The ABCs of Being Kind by Ruby Roth

An ABC of Pirates by Caroline Stills

Journey Around Chicago from A to Z by Martha Day Zschock

Museum ABC produced by the Dept. of Special Publications, The Metropolitan Museum of Art

For the Love of the Packers: An A-to-Z Primer for Packers Fans of All Ages by Frederick C. Klein [eBook]

Vietnam ABCs: A Book About the People and Places of Vietnam by Theresa Alberti


For more ABCs, try a subject search of "Alphabet books".

If you are interested in more adult abecedarian titles such as The ABCs of Bridge or The ABCs of Handwriting Analysis, try this search like this.
Posted by abcreader at 8:30 AM