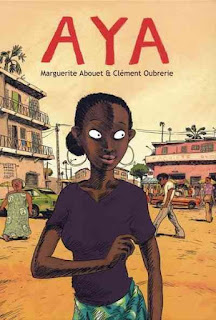 Marguerite Abouet is a writer of bandes dessinées - literally, "drawn strips", in the tradition of Hergé's Tintin series and popular with French and Belgian readers. Originally from Côte d'Ivoire, Ms. Abouet (along with her husband and illustrator, Clément Oubrerie) lives in France. Aya is her most famous work:  six bandes dessinées set in Côte d'Ivoire, featuring three young girls and their families. They are translated by Helge Dascher.

Why we love Aya: Set in the 1970s, when Côte d'Ivoire was booming, the reader sees a narrative that "[belies] the news channels' unremittingly tragic narratives and unsettling images"* of African nations. Aya, Adjoua, and Bintou are friends, finishing school, going to dances, getting involved in relationships, hoping for future prosperity. Their story can be a bit of a soap opera, featuring elements such as contested pregnancies and secret second families, but the humor and vibrant characters shine through, and the art highlights the rich beauty of the culture. Be prepared to get caught up in the lives of Aya and her friends as they navigate their adolescent growing pains, all too familiar despite the difference in time and place, and steam on into adulthood.

Find them in the library catalog:

Aya
A standalone edition of the first book in the series.

Aya: Life in Yop City
Compilation of the first 3 books in the Aya series, published in English under the titles: Aya, Aya of Yop City and Aya: The Secrets Come Out. Aya is 19, and the story is "a wry soap opera revolving around the simple pleasures of private troubles of everyday life in Yop City."**

Aya: Love in Yop City
The final three chapters of the the Aya story - "...in this second volume Aya and her friends begin to make serious decisions about their futures."** This volume also contains extras like recipes and a guide to Ivorian slang.


*from the preface by Alisia Grace Chase, PhD
**from the book blurb
Posted by abcreader at 7:30 PM