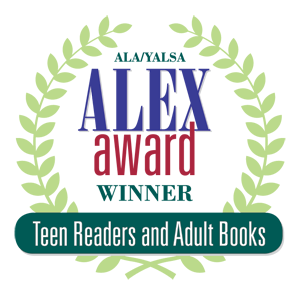 Do you know a teen (ages 12-18) who is ready to read at an adult level, and is looking for titles? Are you an avid young adult book reader looking for a change of pace? Look no further than the Alex Awards, administrated by YALSA [Young Adult Library Services Organization].

The Alex Awards are named for Margaret Alexander Edwards (called Alex by her friends), who was the administrator of young adult programs at Enoch Pratt Free Library in Baltimore for over thirty years. In the middle of the 20th century, she was one of the first librarians to recognize that "adolescence was...a distinct age different from both childhood and adulthood" and reached out to local young adults via "booktalks" in high schools to establish programs for teens and to make teens aware of services and materials available to them to them in the public library. She even rented a horse-drawn wagon to bring library collections to those who couldn't get to the library!  You can read excerpts from her book about her experiences, The Fair Garden and the Swarm of Beasts: The Library and the Young Adult, online.

The Alex Awards were born in 1986 as the "The School Library Journal Young Adult Author Award/Selected and Administered by the American Library Association's Young Adult Services Division". The Alex Awards are given to ten books written for adults that have special appeal to young adults, ages 12 through 18, selected from the previous year's publishing. The award has been annual since 1998.

The purpose of the Alex Awards is to identify those adult titles that have the most interest and appeal to teens. The titles were selected by the YALSA Adult Books for Young Adults Task Force from the previous year's publishing and were  part of the Adult Books for Young Adults Project, which explored the role of adult books in the  reading lives of teenagers and was funded by the Margaret Alexander Edwards Trust. In 2002, the Alex Awards were approved as an official ALA award, and the Task Force was superseded by the Alex Awards Committee. The task force decided to select ten titles annually, and also decided to select a top ten list rather than a single title or a long list because of the popularity of the concept and because it parallels the Top Ten titles selected by the Best Books for Young Adults and Quick Picks for Reluctant Young Adult Readers committees. The task force members also believed that selecting more than one book provided a greater variety of titles, whereas a longer list would be less selective than desired. A top ten list also allows for a more balanced list—fiction and nonfiction, as well as various genres.


All Involved by Ryan Gattis

Between the World and Me by Ta-Nehisi Coates

Bones & All by Camille DeAngelis


Girl at War by Sara Nović


Half the World by Joe Abercrombie


Undocumented: A Dominican Boy's Odyssey From a Homeless Shelter to the Ivy League by Dan-el Padilla Peralta