Why You Should Be Watching Mr. Selfridge 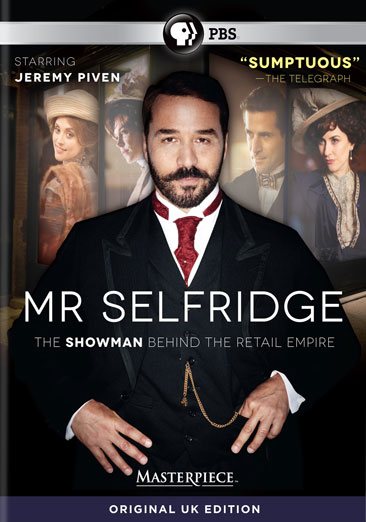 Mr. Selfridge is in its fourth and final season, and I am completely addicted. A colleague recommended it to me, mainly because my favorite actor, Jeremy Piven, stars as Harry Selfridge. Because it's a PBS show, Mr. Selfridge doesn't get much publicity, so I thought I'd give you five reasons why you should watch it.

5. The acting is amazing. Every single person who is in Mr. Selfridge does an incredible job bringing their characters to life. It's impossible to watch this show without caring about every character (even if it means you just don't like them--and there are plenty of characters in Mr. Selfridge to dislike).

4. Speaking of characters, the storylines for all of them are intense. This show is an emotional roller coaster; I've laughed, I've cried, I've yelled at the TV. If there's an emotion you can feel, you will at some point.

3. The set and costumes are so visually appealing. Because the show is about a department store, the set has to be amazing, and it is. The displays, especially the window displays, are a highlight; the set wouldn't be as beautiful as it is without them.

When it comes to the costumes, Mr. Selfridge is a period piece, which means the costumes had to be carefully selected to fit the period. I love them, especially the costumes from the fourth season. The costumes take on a life of their own throughout the series; they alone make the show worth watching.

2. Historically, Selfridges was the first department store to be opened in London. The impact this had on the way people shopped was incredible, and it's fun to watch the evolution of Selfridges throughout the series.

Want to catch up on the first three seasons? Click on the links below to put them on hold!

This is perfect. Thanks for the tip!