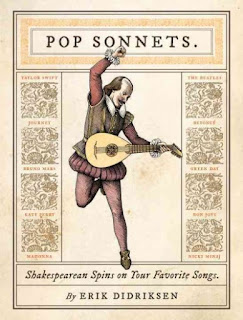 There are events all over the world to celebrate Shakespeare on the 400th anniversary of his death on April 23rd. (As American foodies, we're particularly interested in the "complete culinary works" celebration in Chicago - "Join 38 of Chicago’s most talented chefs for an unprecedented exploration of food and theatrical storytelling in their restaurants across Chicago and throughout 2016. Each chef artfully translates one of Shakespeare’s plays into a featured dish, menu or event at their restaurant, showcasing Chicago’s vibrant restaurant scene." Yum!) Closer to home, the Folger Shakespeare Library's First Folio Tour came through New Mexico recently, and you can find more local Shakespearean events on the Albuquerque Convention & Visitors Bureau's Visit Albuquerque site.

Maybe you are not looking to eat like an Elizabethan or attend any events, but still are interested in the life and work of Shakespeare. The library is here to help! Here's a sampling of some items from the library catalog to slake your thirst for the works of the Bard...whoever you think wrote them, because that dispute is alive and well.

Vinegar Girl: The Taming of the Shrew Retold by Anne Tyler

How To Be a Tudor: A Dawn to Dusk Guide to Tudor Life by Ruth Goodman

Women of Will: Following the Feminine in Shakespeare's Plays by Tina Packer

Year of Lear: Shakespeare in 1606 by James Shapiro

Selling Shakespeare to Hollywood: The Marketing of Filmed Shakespeare Adaptations From 1989 into the New Millennium by Emma French [eBook]

Shakespeare in the Garden : A Selection of Gardens and an Illustrated Alphabet of Plants by Mick Hales

Shakespeare and Co.: Christopher Marlowe, Thomas Dekker, Ben Jonson, Thomas Middleton, John Fletcher, and the Other Players in His Story by Stanley Wells

"Shakespeare" by Another Name: The Life of Edward de Vere, Earl of Oxford, the Man Who Was Shakespeare by Mark Anderson

Shakespeare Uncovered, Seasons 1 and 2
Episodes combine history, biography, iconic performances, new analysis, and the personal passion of their celebrated hosts to tell the story behind the stories of Shakespeare's greatest plays.

Slings & Arrows
Based in a fictional Canadian town where legendary theatrical madman Geoffrey Tennant returns to the New Burbage Theatre Festival, the site of his greatest triumph and most humiliating failure, to assume the Artistic Directorship after the sudden death of his mentor, Oliver Welles.

Shakespeare: The Animated Tales
Animated story telling of twelve of Shakespeare's most popular plays, featuring the voices of actors from the Royal Shakespeare Company.
Shakespeare Retold
Macbeth is the chef in a 3-star restaurant; Beatrice and Benedict are rival co-anchors; Titania and Bottom carouse in a tawdry theme resort; and Petruchio sets out to tame the conservative Kate in a politically incorrect marriage of convenience.

Much Ado About Nothing
2012, contemporary spin
2003, Kenneth Branagh

Shakespeare 400
Shakespeare400 is a consortium of leading cultural, creative and educational organisations, coordinated by King’s College London, which will mark the 400th anniversary of Shakespeare’s death in 2016. Through a connected series of public performances, programmes, exhibitions and creative activities in the capital and beyond, partners will celebrate the legacy of Shakespeare during the quatercentenary year.